It is great to be able to report on the expansion rather than the closure of a Sherry bodega. Things have been going well in recent years for José Luis Barrero, owner of the Sanlúcar bodega Sánchez Ayala so he has decided to invest in increased wine stocks in order to grow the business and this will require the purchase of another bodega in which to store it all. So far he has bought no fewer than 670 top quality well seasoned American oak butts but until he can acquire a suitable bodega he has rented a warehouse in the outskirts of Sanlúcar where he is filling them with wine. To these he will add a further 300 butts of wine which he has stored at his vineyard Las Cañas.

Meanwhile the girls at Cuatro Ojos Wines in El Puerto de Santa María have produced another dry Moscatel called La Má. There is a lovely expression that “The Moscatel de Alejandría dies of pain if it can´t see the sea” since it likes to grow on sandy soils in places like Chipiona, where these grapes come from. It is made exclusively for the three Michelin star restaurant Aponiente in El Puerto, an impressive accolade for a tiny artisan bodega established only 3 years ago.

Diez Mérito have introduced a smart new label for the Pemartín Sherries: 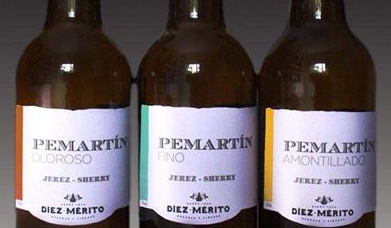 The Spanish Association of Wine Writers and Journalists (AEPEV) has announced its choice of the best wines and spirits from Spain for 2018. They selected the best from 575 suggested brands in 11 categories and Andalucía was the region with the most awards. From the province of Cádiz the following won prizes: