For the fifth year running the Consejo Regulador has held the competition for the best mosto. Since nearly all of this will go on to become Sherry, its quality is extremely important and the Consejo is incentivising producers by giving awards to the best. This year 40 different mostos were entered for the two categories: mosto produced by growers and that produced by bodegas and they were judged in a blind tasting by the Consejos´tasting panel. There are three trophies and corresponding diplomas in each category and they were awarded yesterday with the winner being Viña La Zorrilla from José Manuel Hernández Ávila in the grower category and Gonzalez Byass in that of the bodegas. A public tasting took place afterwards at the Consejo´s bodega San Ginés.

40 years ago most bodegas in Sanlúcar had a distillery but they gradually disappeared. Now the town has a new distillery. The Destilería Weisshorn is located in the Barrio Alto and was set up by Roberto Payá and his wife María Eugenia Rodríguez who own the well known Weisshorn restaurant. The name refers to a ship carring a cargo of rice which ran aground at Sanlúcar in 1994 and the remains of it can still be seen on the horizon. The distillery´s first product was Luciferi Doñana Gin to celebrate the 50th anniversary of the Coto Doñana being declared a National Park. It contains botanicals foraged in the Coto Doñana like rosemary, myrtle and mastic along with juniper and citrus and is based on spirit distilled from rice. 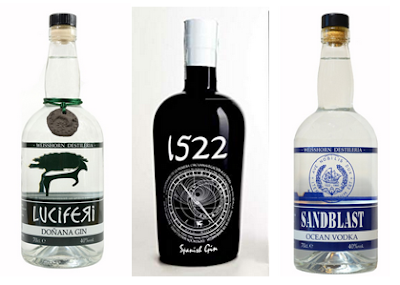 They have also produced a special version, 1522 Spanish Gin, aged in old Manzanilla butts, this time in celebration of Magellan´s voyage. This week they launched Sandblast Ocean Vodka, named after the US navy´s Operation Sandblast, the first circumnavigation of the globe by submarine in 1960 using the same route as Magellan. The vodka is distilled from organic grapes and contains just a little sea water. They used to have the spirit distilled for them to their specifications but now have their own distillery and are already planning the production of other artisan spirits like rum, brandy and whisky.
Posted by Paula MacLean at 17:06