Appearance
Deep transparent old mahogany fading through amber to green at the rim with copper highlights.
Nose
Intense and fragrant with that super complex combination of exotic woods and toasted nuts only age and maturity can achieve. There are traces of all sorts of things like old oak barrels, walnut, toasted almond, carpenter´s workshop, antique furniture, salinity, volatile acidity and an attractive and balancing trace of toffee all wrapped up in one beautiful, fascinating aroma.
Palate
Again intense but also finely profiled, nutty, woody and extremely elegant despite the intensity and the concentration. Wood tannins are inevitably present in the wine but they are not aggressive and there is enough glycerine to round them off and they give a good grip while there is a slightly saline edge to all that nutty toffeeness. Lengthwise, this astounding wine goes on forever, revealing more of its subtleties as it goes, reflecting the "vigorous reality concealed in a Jerez Viejísimo" as Gaspar Florido rightly writes on the back label. Utterly magnificent.
Comments
This is a very old wine with a probable average age of between 50 and 80 years.The solera, originally belonging to Rodriguez La-Cave, consisted of 25 butts, hence its name, (there was/is also a 30.GF) but the lack of the mention of a type of wine on the label is due to Gaspar Florido´s belief that at such an age Amontillado, Palo Cortado and Oloroso all become so similar it is hard to tell them apart. The firm was established in about 1800 and eventually sold to Domecq but the family re-established it as an almacenista in 1942 with various bodegas in Sanlucar, and in 1997 they decided to bottle wine and sold some of these very old wines for an extremely high price. The must came from their own 33 ha Viña El Armijo vineyard. The firm was bought in 2007 by Pedro Romero along with most of its stocks, though some of the 25.GF and 30.GF was retained by the family along with the vineyard. Bodegas Alonso bought the bulk of it after Romero went bust, so unusually these wines are (occasionally) available from two sources, though with different labels. This is an original bottling and is one of the 15,000 bottles filled in what is a rather large annual saca for this type and price of wine. It was bottled in the first saca, in 1997, and if I had to guess what style it is I would say Amontillado. Such quality for such a low price would be impossible to find anywhere else.
Price
90 euros, Er Guerrita 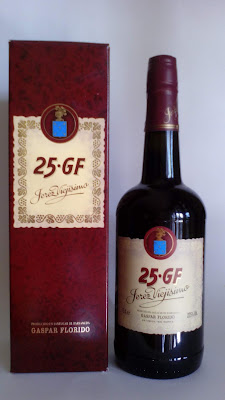