Much more intense and completely different to the 2010. Dry and ripe with strawy, biscuity almost baked sour dough notes and aromas of toasted almond mingling with gently bitter flor and a faint buttery, slightly autolytic character. There is also the faintest note of oxidation which is absent in the 2010 which is light, subtle and elegant while this is more of a blockbuster - but also lovely.
Palate
Again much fuller, very dry and a little more mature tasting, despite being a year younger, with intense nuts and more bitter flor and that teasing slightly oxidative note. It has terrific length. Interestingly it is one degree lower in alcohol when one might expect the reverse being from a hotter year. And it is amazing how two such different wines can both be so good in such different ways, something the solera system would iron out, which is what makes vintage wines so interesting.
Comments
GB have released two very interesting Finos from very different but consecutive vintages: 2010 (QV) and 2011 which came from exactly the same vineyards in the pagos Carrascal and Macharnudo and which were made in exactly the same way, so the only differences are the vintages and one year of age. That gives us the rare opportunity to compare wines from these two years. Vintage Fino is not easy to produce as it cannot be refreshed the way it normally would be in a solera, and so the alcohol level can rise killing off the flor. It is more or less up to the Gods - and expert oenologists - as to how the wine will turn out, especially after 7 years. The 2010 came from a cooler wetter year while this 2011 came from a hot dry year with plenty of Levante and higher average temperatures, giving a good contrast. The harvest began quite early on 17th August and was of exceptional quality, and the wine was bottled almost exactly 7 years later on 16th August 2018, just 700 x 50cl bottles.
Price
32.75 euros per 50cl, Licores Corredera 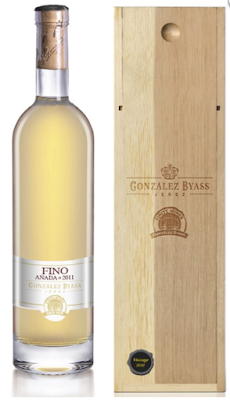