The Phoenicians: Founders of the Sherry Industry

It was this largely peaceful mercantile people who first planted the vineyards in the area of Jerez so we have a great deal to thank them for. They came from Phoenicia, modern day Lebanon, but it was never a unified country in the modern sense of the word but rather a collection of cities, principally Tyre, Sidon and Byblos, whose inhabitants made a living from maritime trade and associated industries. The Greek historian Herodotus said of them that they were “a people drawn to the sea because of their geography” which was not particularly suitable for other activities. Their epoch was between about 1500 BC and 300 BC or the late Bronze Age/early Iron Age. 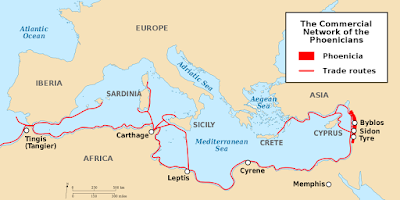 Descendants of the Canaanites, they were very active and prosperous traders searching out goods and raw materials from the length and breadth of the Mediterranean (some believe they even discovered America) and transporting all sorts of goods made by themselves and other peoples of the Middle East. They were fine shipbuilders, navigators and valiant explorers who possessed large mercantile fleets, whose ships were equipped with both sails and oars and often had a horse´s head on the prow in honour of their sea God Yamm. They also had military escorts to protect them from pirates.

They established colonies, rather than an empire, and factories in practically all the countries with a Mediterranean coastline and served as a link between the ancient civilisations of the East and the peoples of the West. The importance of their trade led them to invent an alphabet, and this would evolve and be adapted by the Greeks and later the Romans who spread it to most of the (known) western world.

The Phoenicians traded in vast numbers of goods including Tyrian purple dye, fabrics, fine timber like cedar, silver, incense, myrrh from Arabia, precious stones, spices, Indian marble, glassware, Chinese silk, slaves and Caucasian horses, but above all wine. They supplied Egypt with it for centuries as it was near impossible to produce there and it was a key article in their trade with the incipient city states of Greece mainly in the area of Thrace.

All this time they were bringing grapes and planting extensive vineyards in their colonies and the surroundings of their factories, both those in North Africa (among them the city of Carthage in modern day Tunisia which would later inherit Phoenician power) and those in the Iberian Peninsula like Cádiz and Málaga (both of which they founded) among others including Marseille in France and also Italy. From Cádiz (Gádir) they exported wine and metals while Málaga (Malaka) began as a place for curing fish where they also planted vineyards.

The Carthaginian Mago wrote a (now lost) treatise on viticulture and winemaking referred to by the Roman Columela who was impressed by Phoenician skills. They understood climate and topography, shelter and irrigation as well as vine selection and thus where was the best place to plant a vineyard, and they pioneered all sorts of wine styles including sweet wine from raisins (even retsina!) along with the use of amphorae to transport them. It is thought that the vine they planted, (vitis vinífera pontica) which had spread to Phoenicia from the Caucasus where vines probably originated, is likely the forerunner of many vine varieties in Europe today.

The VI century BC Greek geographer Eutymos wrote that around 1100 BC the Phoenicians were cultivating vines and making wine in quantity in the region of Jerez (or Xera as they called it) and fellow Greek geographer and historian Strabo confirms this in the I century BC in his work Geography, while the Roman historian Rufo Festo Avieno also mentions this in the IV century AD. Recently two wine treading lagares were discovered in Phoenician archaeological remains from the VII century BC known as Doña Blanca which lie between Jerez and El Puerto de Santa María, showing that even then the produce of what is now the pago Balbaina was highly regarded.

Since the Phoenicians established these auspicious foundations, many other civilisations have come and gone through the Jerez area, all leaving an indelible mark on what would become the best wine in the world, and probably the oldest.

Email ThisBlogThis!Share to TwitterShare to FacebookShare to Pinterest
Labels: Paula's Sherry Blog, Sherry, The Phoenicians: Founders of the Sherry Industry