Appearance
Bright, very slightly brassy gold with golden highlights.
Nose
Forthcoming with lots of very slightly buttery bitter almondy flor with hints of esparto and dried herbs and a slightly saline fresh sea air note. There are gentle hints of cabezuela which give complexity yet the wine is very slightly reserved and a little less assertive than the spring and autumn sacas which is only to be expected as the flor is more intense then.

Palate
Considerable intensity of yeasty flavour with that rich buttery autolytic character carried through by perfectly restrained acidity which gives the wine balance and a gentle tang without excessive bite. There are notes of humidity, salinity and a dry chalky texture but everything is delightfully harmonious and the wine has terrific length.
Comments
Bottled en rama in January 2018 and made from vines over 30 years old. Wine is drawn from the Solear solera at about six years old and goes to another 550 butt solera of two clases where it ages in the firm´s El Potro bodega for another two years before a selection of the best 15 butts is made of approximately 100 litres per butt.
Price
14 euros per half bottle, Licores Corredera 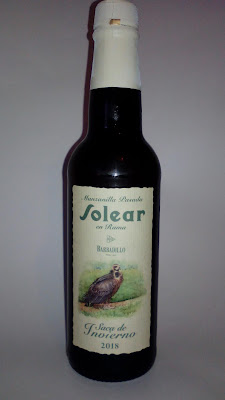 Posted by Paula MacLean at 14:15 No comments:

Back in 2016 chef and owner of the triple Michelin starred restaurant Aponiente in El Puerto de Santa María, Ángel León, and his sommelier Juan Ruiz Henestrosa selected a butt of Fino at the Luis Caballero bodega El Drago. This was duly bottled en rama and labelled for them and the wine was available exclusively at the restaurant under the name “Yodo” which translates as “iodine” in reference to the maritime character of the wine. There were 300 x litre bottles and there have been a couple of  sacas since then including an Amontillado.

Now another special wine selection from a single butt at Lustau has been made, this time by Ángel León and his great friend Andoni Luis Aduriz, chef and owner of the two Michelin star restaurant Mugaritz in San Sebastián. It is called "Txodo", the Basqe pronunciation of "Yodo". The selection was made with the help of Lustau oenologist Sergio Martínez and this time it is a 20 year old Oloroso en rama which spent 18 years ageing statically and which will be available exclusively at both restaurants. 1,000 x 50cl bottles.

Posted by Paula MacLean at 14:19 No comments:

Appearance
Fairly pale strawy gold with golden highlights.
Nose
Fresh, forthcoming and attractive with lots of ripe fruit like apple, quince and apricot and traces of white flowers, honeysuckle and even a faint honeyed note. There is a certain generosity to it and a touch more complexity than Palomino alone would offer; those traditional old grape varieties really make a difference.
Palate
There is some depth here and the roundness of that ripe fruit is backed up with refreshing acidity giving it a pleasant tanginess. Then there is the classic Trebujena salinity giving a nice tension with the fruit and that dry chalky texture. Really good and interesting wine for the money.
Comments
This is the second release of Bijuré after last year´s very successful launch to celebrate the 40th anniversary of the Albarizas Cooperative in Trebujena. It is a very interesting - not to say delicious - wine as it is made from old vine vidueño - a blanket term for other old traditional varieties which include Perruno, Mantúa, Barcelonés, Castellano, Cañocazo, Beba etc. and perhaps a little Palomino - all grown in albariza soils overlooking the area´s Guadalquivir marshland. The must was co-fermented in old butts seasoned with Fino, Amontillado and Oloroso before minimal stabilisation and bottling in late December. Only 3,000 bottles were produced. The wine can´t have any appellation status because of its use of no longer permitted varieties - or indeed the lack of a DO - but it is great to see them being used to such good effect. Maybe that is why Williams & Humbert buy some 50% of their production. Bijuré is a gypsy word for golden.

Posted by Paula MacLean at 17:53 No comments: