Jerezano Alejandro Muchado Suarez met the pioneer biodynamic Champagne producer David Marcel Léclapart in 2011 when he helped with the harvest. To an architecture student this was an eye opener and he returned the following year. David is the 4th generation of a small family Champagne business in Trépail in the Montagne de Reims area using traditional and natural methods in their 3 hectares of vineyard. David was impressed when he visited Sanlúcar and since the Jerez and Champagne regions have a great deal in common, particularly soils, and the pair was fascinated by their similarities and differences, they decided on a joint project to produce wines which would demonstrate their own take on the unfortified wines of the Jerez area. Alejandro by now had some experience in wine working with Viticultores Alba.

They work a total of nearly 3 hectares. Alejandro owns old vines in the 1.7 hectare Viña La Platera in the Pago Miraflores which he bought in 2017 and cultivates biodynamically. Some vines here are 60 years old and the youngest 20, all of them Palomino California. They also rent a 0.7 hectare plot in the pago Abulagar near Chipiona planted to 40 year old Moscatel vines. All the vineyards were in a rather poor state and he has been working hard to recuperate them. They rent a small bodega in the Barrio Alto in Sanlúcar and formed their limited company in February 2017. The plan was to show the soils of the vineyards in all their glory. 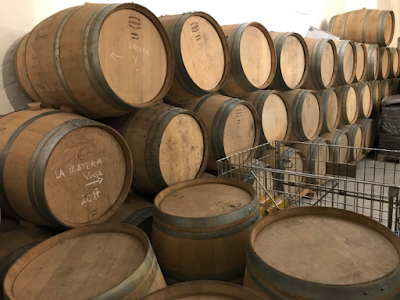 Vinification is simple. The grapes are hand harvested in the early morning and after pressing are fermented in tanks made of steel, not stainless steel but painted inside with a special ceramic paint, and without refrigeration equipment. Fermentation is kept cool simply by a pair of air conditioning units, and only the absolute minimum of SO2 is added. Barrels are kept full to avoid flor and the wines are bottled unfiltered after brief ageing in old Manzanilla and Amontillado butts as well as other types.

Although their first vintage was 2016, with all the wine vinified in butts, they chose to wait and release the 2017. Their first release was Muchado-Léclapart Univers 2017, made from Palomino Fino and Palomino California from La Platera, but by spring 2018 they had released a total of 6 wines, one sparkling (Fugaz). Production totals over 16,000 bottles – nearly double David’s production of Champagne. 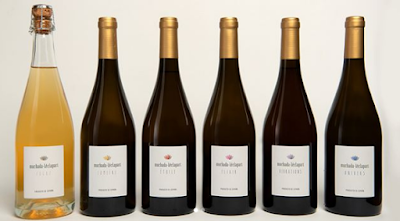