Appearance
Bright pale lemony gold with golden highlights.
Nose
Forthcoming zippy and quite fragrant. Chardonnay can often be a little vegetal with added oak for flavour, but this wine seems not to have any oak and instead has slightly tropical fruity aromas of lemon icing, pineapple and kiwi, very appealing.
Palate
It has a lively refreshing tartaric acidity and plenty of those tropical fruit flavours which give it a slightly New World character which is slightly at odds with its Cádiz origins. Nonetheless, it is elegant and fresh and would be perfect for casual summer drinking.
Comments
Santiago Jordi Martín is a consultant oenologist and president of the Federation of Associations of Spanish Oenologists. His philosophy is to make interesting wine from small vineyards on poor low fertility soils using traditional methods and varieties with minimal intervention so that the vineyard character can shine through. This 2017 is the first release of Atuna, which is made from 100% Chardonnay, is a Vino de la Tierra de Cádiz. The label illustrates the various cuts of tuna, which the Cádiz coast is famous for, and he produced the wine with accompanying tuna very much in mind. "Bottling the power of the sea of Cádiz, the personality of its aromas and the character of its seafood" as he puts it. Only 6,500 bottles have been produced. 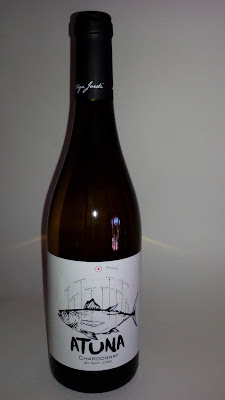