“Good name in man and woman, dear my Lord, is the immediate jewel of their souls: who steals my purse steals trash; ‘tis something, nothing; ‘twas mine ‘til his, and has been slave to thousands; but he that filches from me my good name robs me of that which not enriches him and makes me poor indeed.” (Shakespeare, Othello, 3, 3)

With centuries of successful trade, Sherry had built up such an international reputation that imitation was inevitable. As long ago as the XVII century cheap imitations were being manufactured from raisins, and by the XIX century it was big business. One infamous concoction known as “Hamburgh” was reputed to contain no wine at all, let alone Sherry. Far from the quality of the genuine article, but at least made from grapes, were the British Empire wines from Australia, South Africa and Cyprus principally. Taking advantage of preferential duty rates, these imitations were far cheaper and had a patriotic cachet. 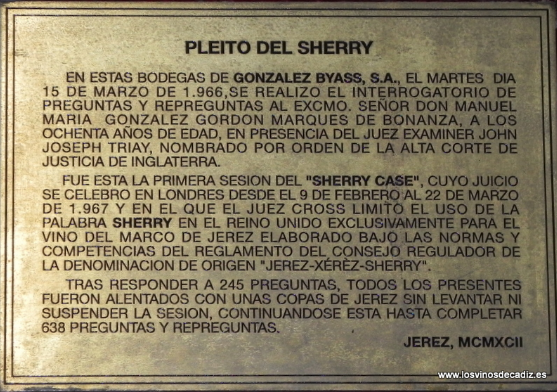 At the turn of the century one Mr Mitsotakis, a Greek living in England, came up with the idea of concentrated must, grape juice with most of its water content removed, which meant cheaper shipping. On arrival the must would be reconstituted with water, fermented and somehow manipulated to resemble Sherry. Known as “British Sherry” it was a great success and paid even lower duty than Empire wines, but as Jancis Robinson rightly pointed out, it was neither Sherry, nor even British. The Sherry producers had to do something about this blatant forgery and most began to produce cheaper wines, which inevitably did little for the real wine’s image.

By the early years of the XX century sales of real Sherry had declined dramatically and in 1910 the Jerez exporters who had offices in England formed the Sherry Shippers Association to protect their interests. In 1924 the Spanish government accorded the trademark “Jerez” to its producers and soon sellers of non-Spanish “Sherry” were being prosecuted in England. However wines sold with qualifying terms such as “British”, “Australian” etc. were still permitted, meaning that “Sherry” was considered a generic term in Britain. The Denominación de Origen was introduced in 1933, giving Sherry an identity related to its place of origin, and this would lead to long overdue change.

Civil war in Spain followed by the Second World War severely restricted Sherry shipments and allowed the imitators an opportunity to grow, especially during the post-war period of greater prosperity in the 1950s qnd 1960s. As imitators grew more provocative in their advertising – the South African KWV even claimed that one should drink their product “because it is real Sherry” – the Spanish shippers were getting cross. Finally, in 1961 the touch paper was lit ... by the French.

Exasperated by all the imitations of French wines Bollinger, supported by other Champagne houses, took the Costa Brava Wine Company, a British importer of Cava, to court for passing off the wine as “Spanish Champagne”. Bollinger won the case and the High Court ruled that Champagne should be defined as the wine of the Champagne district, establishing the principle that it was not generic but a place name. The Sherry Shippers Association was inspired and in 1966 the shipper McKenzie & Co, backed by the Association, took Vine Products to court for the use of the term “British Sherry”.

The complicated case lasted six weeks involving the top lawyers of the day and mountains of papers, labels, wine lists, price lists, posters, books etc., even a XVII century English comedy. But perhaps the most persuasive document was the famous Al Idrisi map from 1154 which clearly showed that "Seris" or Jerez was most definitely a place. Vine Products’ defence was based on generic usage of the term “British Sherry” over a very long time. Manuel María González Gordon (1886-1980), author of the classic “Sherry the Noble Wine” and, aged 80 retired president of González Byass, gave his evidence to lawyers appointed by the court at the bodega as he was too old to travel. Half way through the questioning he offered everyone a welcome glass or two of (proper) Sherry!

The Sherry Shippers won the case in 1967. In his summing up Judge Cross acknowledged that the word “Sherry” used by itself could only apply in Britain to the legitimate product of Jerez, which like Champagne, is the name of a place. However, disappointingly he allowed Vine Products’ argument that since terms like “British”, “South African” etc. had been in use for so long, they could co-exist.

The subsequent promotional campaign “Real Sherry Comes Only from Spain” met with moderate success, but it would take till the 1st January 1996, with Spain and Britain now both members of the European Union, for the qualifying terms “British” etc. to be finally banned from sale in the EU. That ban, however does not apply to domestic sales in the USA or Canada, while in Australia the name was changed to “Apera”. Sherry had at last filched back its good name.

The Consejo Regulador is to hold its July plenary meeting at the Bodegas of González Byass to commemorate the 50th anniversary of the interview with Manuel María González Gordon which took place there. One of the Sherry Shippers' surviving lawyers and representatives from Champagne will be invited to participate in the celebrations as guests of honour.