An Interview with Luis Gutiérrez, Wine Advocate Man in Spain

This is a modest translation of the interview with Ángel Espejo published in yesterday’s Diario de Jerez.

What brings you to Sanlúcar de Barrameda?
I’ve come to taste the wines of the Marco de Jerez and a few others from Andalucía, and while I’m here I’m going to present my new book “Los Nuevos Viñadores” (Planeta Gastro) as part of the series of tastings at La Taberna der Guerrita. But I’m usually here every year and combine work with sharing some wines and fun with my friends.

Awarding Parker points is a great responsibility and not devoid of pressure. How do you do it?
My job is to write articles but they have to be accompanied by tasting notes and scores. For me it is very important to understand what is happening, speak with people, visit the vineyards, the place… because in the end you understand the wines when you walk in the vineyard. In the end it all boils down to a number, the score, which for me is a hierarchy of how I see the quality of the wines. People think I make a list of numbers, but if I did that I would only be working a couple of days every couple of months, and it’s not like that. I’ve just been in Galicia, and only the tasting notes and explanations of the bodegas would fill another book.

When you started with Robert Parker Sherry didn’t exist in the guide…
When I started I saw that there had never been an article on Sherry in the Wine Advocate and I was the first to write one. A few Sherries had been tasted for the publication but out of context and without getting to the bottom of the wine which for me is important. I am an engineer so I am logical in my thinking and I like to understand the how and why of things. And wine is much more than what goes into the bottle. It is about traditions, culture, countryside, the place, the gastronomy… For me that is all information and the articles I write for the Wine Advocate are very similar to what I have written in the book. I believe people are much more interested in that than in numbers which are just a simplification in this hierarchy of wine quality.

Is it a job or a way of life?
Wine is not a vocation, it is a passion, it’s mad and takes up all your time, and those of us caught up in this madness are happy because we love what we are doing. 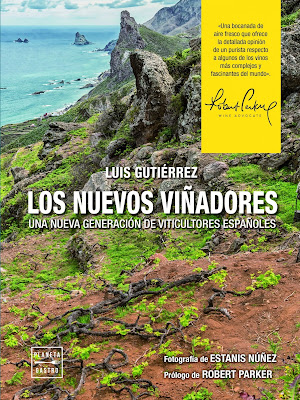 “Los Nuevos Viñadores” is a book about wine in which you talk very little about wine.
Yes. It is a book of stories, human stories, about people, about who they are, where they live and what they do, but the idea was that someone like my mother, who knows nothing about wine, zero, could read the book. I didn’t want to write a technical book because I think we put people off when we talk like that and make things too complicated and exclusive. It annoys me when people say they don’t drink wine because they don’t understand it yet they eat meat without understanding it.

Why this obsession with making the world of wine so complicated?
You either like wine or you don’t and you can complicate it as much all you like because it is a super- complex, infinite world. The more you learn the more you realise how little you know. It is important that we try to simplify it all and bring wine closer to the people because we are creating a sort of ghetto, a wine sect, we are isolating ourselves. We have the lowest per capita consumption in Europe and that is dreadful.

How do you feel when you come across a wine with 100 Parker Points?
I always say that it is a wine which accelerates the heartbeat, which really brings out your emotions, it drives you crazy, it sets your head spinning. And after trying it I get to searching everywhere to buy some, whatever it costs.

In your book the land obviously attracts you.
I believe that the diversity we have in Spain is very important and in the book I show that diversity and how the wines reflect it. Wines could all be made the same which I don’t like at all, and the more you get into it the more you want differences and personality, which is what the market wants right now. Spain has a tremendous advantage because we have so many indigenous grapes which we have been undervaluing and now we are recuperating them. Tempranillo was standardised in Spain and brewed up all over the place, but how are you going to produce a Ribera del Duero in a subtropical zone with white grapes? It’s been tried of course and was a disaster.

What do we lack?
We lack belief in what we have, and the big step forward is that we are beginning to believe. We have always had some sort of complex, like improver grape varieties. What happens if yours are worthless and you need something to improve them? It’s crazy. It’s about not making all wines the same but about making them different and adapted to each place. It’s happening in the Canaries, in Galicia and Jerez. Right now there is a tremendous acceptance of these different wines in Britain and the United States. What’s happening in Jerez is amazing, and for me Equipo Navazos has put Sherry back on the world stage. People wonder why what they are doing, something as simple as selecting wines and demonstrating how they really are, has not been done by anybody before?

THE PAST IS THE FUTURE


In his new book, “Los Nuevos Viñadores” Luis Gutiérrez (Ávila, vintage 1965) examines 14 Spanish wine regions to offer a human profile of the growers who, in his judgement are making some of the best wines in Spain. “Robert Parker’s Man in Spain” is presenting his book in Sanlúcar tonight at a tasting at Taberna der Guerrita along with a tasting of the wines of this new generation of winemakers, many of them young but some of retirement age, who share his passion for wine and understand it as a way of life. It is a passion born of a respect for the soil, the vineyard and its traditions which they are recuperating to show in their wines that the past is the future.
Posted by Paula MacLean at 13:26