One of the very many interesting stands at the recent iNNoble event in Sanlúcar was that of Mayetería Sanluqueña. The mayetos are growers who used to make their own wine and sell it – and/or grapes - to the bodegas, but in the last thirty years or so they have stopped producing wine because of increasing bureaucracy. Rafael Rodríguez, one of the mayetos, wanted to look again at wine production so he consulted oenologist Ramiro Ibáñez and thus was born this brilliant initiative which sets out to put them back on the map by working cooperatively under the name Mayetería Sanluqueña. 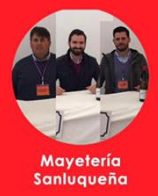 Three mayetos already have wine on the market and it is hoped that next year there will be five, and ideally ten in the next few years, along with a recuperated old bodega. The four wines all bear the brand name Corta y Raspa but the individual producers names are also on the label naturally. These totally artisan wines are all grown and made as naturally as possible, 100% Palomino, fermented in butt and with  little flor for good measure. Unfortunately production is limited to a total of just over 3,000 bottles and they are only available locally, but bigger national distributors have shown an interest. 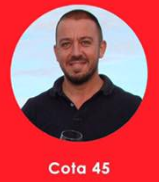 Details of the wines are:
Antonio Bernal, Viña la Charanga (pago Maína) 2016 Antonio is the fourth generation of a family of mayetos known as Los Roteños who have lived in the area a long time and his father was the manager of a large part of the pago for years. Their vineyard is on barajuela type albariza with 30 year old vines. Production 1,000 bottles.
José Manuel Harana, La Atalaya (pago Atalaya) 2016 José Manuel comes from a long line of mayetos who have worked in many pagos and whose vineyard is in the upper (best) part of the pago, although it is under threat from urban expansion. Here the albariza is in the form of lentejuelas. Production 700 bottles.
Rafael Rodríguez, Viña de Morla (pago Añina) 2016 A long line of mayetos, Rafael’s family own some historic plots in Añina like Casabón, La Media Naranja, Morla or Las 40. The lighter of his two wines, Morla has clear biological character. Production 700 bottles.
Rafael Rodríguez, Viña Las 40 (pago Añina) 2016 Despite both vineyards being on tosca cerrada albariza and both having vines of between 20-35 years old, their wines are notably different, and Las 40 is fuller. Production 700 bottles.

I noticed that a crowdfunding project has been set up through Verkami.com to save a Málaga Wine vineyard in Manilva endangered by the spread of urban development and wonder if that idea would help the Mayetos of Cádiz.