Known to have existed in the vineyards of Rota for at least 500 years, the red Tintilla grape appears identical to the Graciano, a minor component of wines from Rioja. It was one of the 119 grapes recorded in Andalucía by Simón de Rojas Clemente, the father of Spanish ampelography, in 1806. The first mention of Graciano in Rioja was much later, so one might assume it originated in Cádiz, yet there is one difference: Graciano has four pips and Tintilla has only one. In Rioja it is said the word originates from “gracias, no” (no thanks) when they refused to buy the Rota grapes. It is most unlikely to be true but there are some very fine Gracianos in Rioja now. The name Tintilla is likely to originate simply from the fact that it is a little red grape.

Like any other grape, various types of wine can be made from it, and there is a variety of soil types in the Jerez area which can offer differences in style. Traditionally it was a fortified wine, but recently quite a few extremely good table wines have appeared, and it is really catching on. Its characteristics are low yield, decent acidity, deep colour, enough structure for ageing and great aroma.

Referred to as “Tent” or “Rota Tent” by Anglophones of past centuries, the fortified sweet wine was very popular in export markets, often being chosen for religious celebrations. The grape thrived in the sandy coastal soils which protect it from the Phylloxera aphid. Already in decline because of its low yields, it could not be protected from the construction of a massive joint Spanish and American military base in the 1950s, which saw the number of producers in Rota dwindle to one: Bodegas El Gato. This is the last bodega in the town producing the classic traditional fortified Tintilla de Rota.

The Vino de Licor, or the classic Tintilla de Rota, is made by a time honoured artisan process. The late-harvested grapes are sun-dried, de-stemmed and pressed. Fermentation takes place in tanks but is stopped by fortification to 17ᴼ. Some juice is then reduced to one fifth of the original liquid volume over a direct fire. The resulting “arrope” or syrup is blended into the wine and it is barrelled-up for ageing. The result is a wine with a tawny to mahogany colour, aromas of figs and caramel on the nose and very sweet on the palate, almost honeyed, yet with a slight tannic/acidic note which provides balance. It is a unique and special wine, and Bodegas El Gato even organise a Tintilla de Rota Day every August. 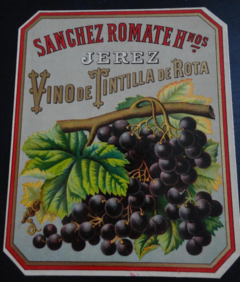 Classic fortified Tintilla de Rota producers:
González Byass (at Finca Moncloa, near Arcos)
Bodegas J Ferris (near Sanlúcar)
Bodegas El Gato (in Rota itself) They make 2, Joven and Noble
(Lustau were selling good old Tintilla from some bought-in butts a while ago, but it’s now gone).

There are also many wines in which Tintilla is a component of the blend, for example Barbazul.

(There is a vineyard in Australia’s Hunter Valley called Tintilla, but it doesn’t grow Tintilla grapes).