Appearance
Deep,fairly dark transparent amber with distinct copper tones and a touch of green at the rim, legs.

Nose
Intensely fragrant; you know at once that this is an old wine as all its nuances have developed into a serious bouquet, but one can still pick out toasted almonds autumn leaves, old polished furniture, tobacco and traces of oak. It keeps on giving and is incredibly well balanced and refined, with an attractive slight nutty sweetness which rounds off the intensity beautifully.

Palate
Intense and extremely complex on entry and that initial impact spreads round the palate stimulating every nerve. It is dry but not quite as tannic as one might have expected for its age but it certainly has grip, enough to give the wine terrific length and texture yet not enough to obscure its charm. It leaves an almost everlasting sensation of  nuts and barrels and a strong desire for another glass. Superb.

Comments
The label includes the words "Diez años despues..." meaning "ten years on...", this being a 10th anniversary release and the first ever from Chiclana, which is in the production but not the ageing zone and thus not DO. Had it been aged in a Sherry town it would certainly be DO - it is of supreme quality. Anyway it is from the approximately 200 year old bodega of Manuel Aragón. The wine is from a single "bota no" in Aragon's bodega Campano which had been sitting around for 50 or 60 years without any topping up and had naturally lost much volume to evaporation, in fact there were barely 300 litres left. The whole butt was bottled, so this wine can never be repeated, and only a little was put on the market. This ultimate contemplation wine scored 98 Parker points. Incidentally Equipo Navazos also bottled an ancient Oloroso from this bodega at the same time (La Bota 63) which scored 99 Parker points. What better wines to celebrate a decade of Equipo Navazos and just how much they have done for Sherry - and for those who love it.
Price
80 euros per 50cl bottle from Er Guerrita 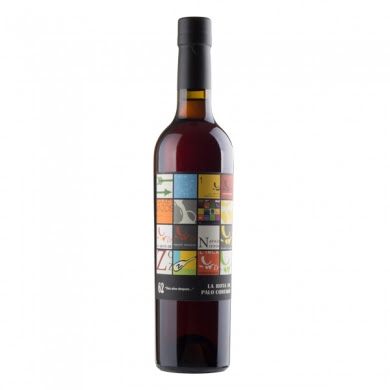