One could be forgiven for not paying much attention to the seal when in a rush to get that perfectly chilled Fino into the glass, but actually the seals are more varied and interesting than people think. Well, at least to geeks like me. But they are largely responsible for the condition of the wine.

Generally they come in three types: firstly the tapón corona or stopper cork. (tapón corona could be translated as “crown cap” but in Spain the word “chapa” often is used to denote beer or soft drink bottle stoppers). Then there are the cylindrical natural cork and the tapón rosca (or screwcap), but within these three basic types of stopper there is a multitude of variations.

When natural cylindrical cork is cut out of the bark it leaves a piece of bark full of cork-shaped holes, and it would be a pity to waste it. The solution is to grind it down to fine or very fine particles, and using special food-safe flexible and waterproof adhesive, form it into various cork shapes. This is called agglomerate cork, and it is both efficient, and cheaper than natural cork and thus very widely used, though it is most suitable for early consumption wines.


It is also easier to detect and remove 2-4-6 Trichloroanisole (TCA) infected granules which could lead to “corked” wine. Diam is a brand which guarantees no cork taint by using a super-critical carbon dioxide process which removes all sorts of possible problems. The world's biggest cork producer, Amorim, also offer guaranteed corks using a gas chromatography process known as ND Tech. MA Silva use gas phase spectroscopy for their One by One corks. Then there is "Subr" which guarantees against TCA and apparently uses no adhesive. Occasionally thin discs of natural cork are stuck onto one or both ends of agglomerate corks, which both improve the appearance and the seal. These corks are called tapones técnicos or 1+1 and are smaller, but on the same principle as a Champagne cork.

Natural cylindrical corks depend on top quality bark and are used for fine wines which are expected to be stored for a while. If the bark is good but not perfect however, corchos colmatados (or filled corks) can be made. These are natural cylindrical corks but have slight imperfections in them which are filled with a mix of cork dust and adhesive making them cheaper.

I have only come across one Sherry with a (pink!) synthetic cylindrical cork made from different plastic polymers and silicone. Production of these closures emits huge levels of CO2 into the atmosphere and they still need further testing for suitability for wine. All the above corks need a corkscrew to remove them, except those for sparkling wine.

Tapones Corona, also known as stopper or T-top corks, can be removed by hand, can be made from any grade of cork – though usually agglomerate - and are very common in Sherry bottles. The material is generally bevelled off at the base for easier entry to the bottleneck, and sometimes given an “acorn” shape for a tight seal. The crown or upper part can be made from any material and to any design, the commonest being wood or plastic, usually adorned with the bodega’s logo. All the above corks need capsules.

The tapon de rosca or screwcap, known in the trade as "ROPP" (rip-off pilfer proof) is widely used for less expensive high turn-over wines and is pretty efficient. A deft flick or the wrist is (usually) all that is required to open the bottle and, unlike the above, no capsule is required – although a different bottle design and bottling equipment are required to accommodate the screw. Screwcaps are made from aluminium and provide a good seal, but are not suitable for ageing wines. They are used for the majority of New World wines, but Spain has its own cork industry and only 5% of wines have screwcaps which are seen by consumers as cheap. Amorim have produced a clever "screwcork" called Helix. Not sure about that one. 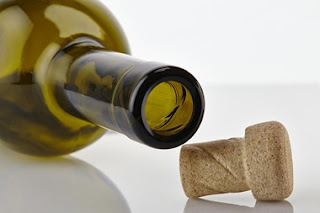