The Palacio de las Dueñas in Sevilla, property of the Duchy of Alba, was the scene for the launch of the sixth edition of the González Byass Palmas range yesterday. The grandeur of the wines matched that of the Palacio itself as oenologist Antonio Flores and GB vice president Pedro Rebuelta led a tasting of the wines, referring to them as “the ages of Tio Pepe”.

Hoteliers, journalists, sommeliers, bloggers and members of Sevilla society, including Cayetano Martínez de Irujo, son of the late Duchess of Alba, were given a glass of Tio Pepe straight from the barrel on arrival. This year’s wines were selected by Antonio Flores and Gérard Basset, the first to become a master sommelier and master of wine. Each wine was introduced with poetry and flamenco guitar. The Una Palma, aged six years was selected from the three best butts of the 150 in the fourth criadera and 3,000 50cl bottles will be released. Only 1,500 bottles will be released of the Dos Palmas which is eight years old. The Tres Palmas is ten years old and 1,000 bottles will be released, while the Cuatro Palmas, a magnificent old Amontillado aged 51 years will be released in only 500 bottles. 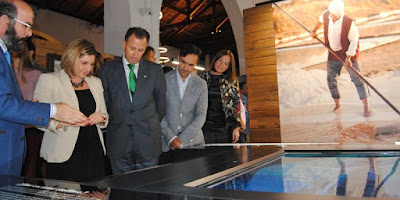 Chiclana’s new Centro de Interpretación del Vino y la Sal was officially opened yesterday by the mayor accompanied by various dignitaries. The museum is located in an old bodega formerly belonging to Viuda Guerrero and latterly to Primitivo Collantes in Calle Concepción. The old bodega has been beautifully restored and contains a huge number of interesting historical items, all donated and extremely well displayed. It offers an amazing insight into the long history of Chiclana, its salt pans, vineyards and bodegas, and of course it’s people. Very well worth a visit.
Posted by Paula MacLean at 17:15