This bodega in El Puerto de Santa María was founded in 1840 by the montañes father of Atanasio Quijano Cieza who took over in 1865. He was blessed with great leadership qualities and was very successful in whatever he did, be it bodegas, business, politics or any other field of human relations. He was married to Concepción Rosende, whose father, an expert arrumbador, gave him the advice he needed to expand the bodega business and improve quality. They owned the 100 aranzada (47 hectare) vineyard called Las Puentes in Balbaina Alta, and there was a bodega in the calle Caldevilla.The family became prominent in the town.

One of the firm’s brands was Moscatel Las Cuatro Perlas, and there is a story about that. Originally, Quijano marketed this wine with the agreement of one Ramón Carlí who owned the trademark, but after his death and through various inheritances, it now belonged to one Domingo Rodríguez. There was no agreement about the use of the trademark and the latter’s complaints fell on the deaf ears of Atanasio. The matter ended up in court in 1900 with the judge finding in favour of Rodríguez. 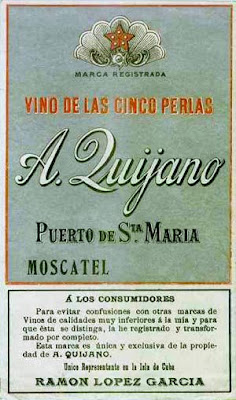 Undaunted, Atanasio simply created and registered a new brand: Las Cinco Perlas and carried on as before, later acquiring a vineyard at Fuenterrabía which he called La Perlita. The firm continued to prosper and had good export business in Africa, Cuba and New York among other markets before tackling Spain itself. They claimed to be the first to export in bottle to America. Atanasio died in 1932 and his son, Francisco Quijano Rosende took over and grew the business as well as occupying many civic and municipal posts. 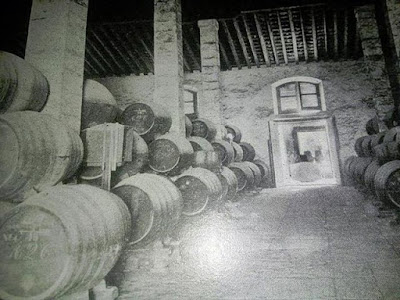 The firm lasted until the late 1950s making a wide range of products such as Ponche, Quina, and Anis as well as Brandies FQ, Admirable, Rosende and Brillante along with Sherries such as their well-known Oloroso Pata de Gallina (this 38 butt solera is now owned by the almacenista Juan García Jarana and bottled by Lustau), Manzanilla Olorosa La Perlita, Royal Cream, Amontillado Viejo 54, Solera Fina, Amontillado Fino Quijano and Old Brown Sherry. The more commercial range consisted of Golden Sherry, Vino de Pasto, Pale Sherry, Cabinet, Jubilee, Army and Navy (perhaps for the store of that name in London) and Gran Vino Tónico Cíclope. Complete with laboratory analysis on the back label.