The Sanish central tax authority, the Agencia Tributaria (or Hacienda as it is known), is to auction off the old firm of Bodegas 501 in its entirety due to its inability to pay taxes owed. According to some, the origin of this sorry tale goes back a couple of decades to an alleged fraud in the payment of alcohol taxes, and the proprietors, José Carlos Torres Gázquez and family and one or two others, reached an agreement with Hacienda offering their site and premises, which have great potential for conversion into housing, as a guarantee. However the bureaucracy involved in changing the oficial use of the site took forever and then the real estate crisis arrived, which made the agreement unworkable. 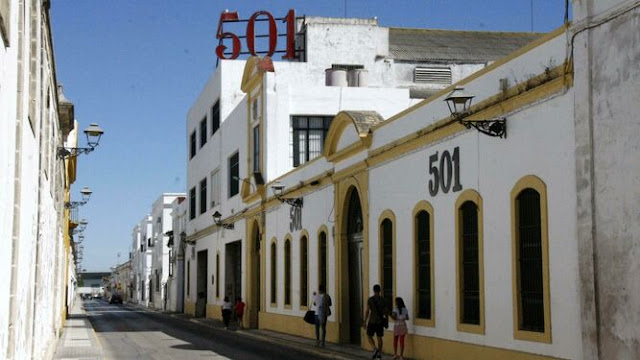 In fact, Bodegas 501, originally known as Bodegas Carlos & Javier de Terry dating from 1783 and re-named after their famous and very successful Brandy 501, ceased their bodega activities twelve years ago and converted themselves into distributors, albeit of their own brands. In 2010 they signed a deal for Sánchez Romate to produce and bottle 501 for the export market, having agreed some six months previously a similar deal with Osborne to produce three versions of 501 – Solera, Grana and Oro - for the domestic market. The soleras were transferred to Romate and Osborne respectively, both of whom have more modern and efficient installations which keep costs down.

The auction will take place on 28th May and in two lots. The first is the buildings which consist of two warehouses and the land they stand on in Calle Valdés in El Puerto de Santa María, for which Hacienda have fixed a starting bid price of 3.2 million euros. The second lot is the industrial proprty rights to 24 brands of wines and brandies, most in disuse, and Hacienda have fixed a starting bid price for these of 11.3 million euros.This sad news comes in the wake of the virtual demise of Garvey.
Posted by Paula MacLean at 11:34

Email ThisBlogThis!Share to TwitterShare to FacebookShare to Pinterest
Labels: Bodegas 501 to be Auctioned Off, Paula's Sherry Blog, Sherry