Appearance
Antique polished chestnut, deep amber fading through amber with copper glints to a trace of green.
Nose
It was pretty closed at first but as it opens out it smells quite old with aromas of damp old butts and a trace of oak, even a hint of exotic woods, plenty of toasted nuts, a faint nutty sweetness, blond tobacco, fallen leaves and a hint of volatile acidity. It is fairly light both in appearance and on the nose but with distinct clean elegant oxidative notes so the likelihood is a lightish Amontillado.
Palate
It is also light on the palate, yet elegant and tasty as it opens out. It is quite old fashioned and there is a good tang, mostly that volatile acidity, which gives it length, and a hint of bitterness, and balances with a modest glycerine content, and still lots of toasted nuts, but very little tannin, though there is a gentle grip. It has perhaps lost just a little of its former verve and charm, but not a great deal and is still extremely well balanced and attractive with excellent length and considerable class. Lovely.
Comments


This is an old wine, probably bottled in the 1970s, but with a good fill level. The base of the bottle puts the possible date at 06/77 with a capacity of 70 centilitres, a size which was not unusual in the 1970s but which was later  standardised by the EU at 75cl. Also the style of the bottle itself is one I recognise from those days. Naturally it needed decanting as there was some fine sediment. The tip of the T cork shows lengthy contact with the wine, but didn't break. Annoyingly the label does not reveal the type of wine it is or the alcoholic strength, and there is no evidence of there having been a back label, but my guess is as above and it could easily have 20 years solera age plus 40 years bottle age. Irishman Timothy O'Neale established the bodega in 1724, so the wine comes from one of the foundational soleras. The firm lasted till 1983, one of the longest lasting of all - so far...
Price
100 euros, Licores Corredera 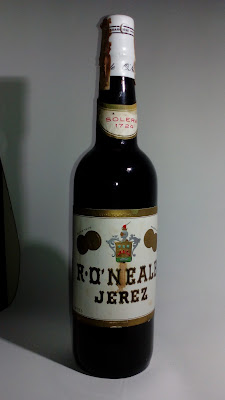