Flor translates as “flower” but it is not nearly so pretty. It is a veil of Saccharomyces yeasts which forms on the surface of Finos and Manzanillas after fermentation. Yeasts are minute single cell organisms which, along with moulds and mushrooms, belong to the fungus family and they reproduce by mitosis or cell division. They have a profound effect on grape juice, transforming it into wine, and in the case of the biologically aged Sherries, creating a quite unique and fascinating style of wine. 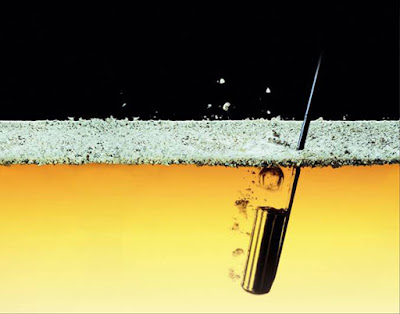 There are hundreds of yeast strains and they are abundant in the environment sticking to grape skins as they ripen. Populations vary according to local conditions and so form a part of the terroir of a particular vineyard. Not all strains are helpful to the winemaker, but the most useful is Saccharomyces Cerevisiae which gives a reliable fermentation of the grape juice after a little sulphur dioxide (SO2) has killed off any undesirable strains. During fermentation the yeasts feed on the carbohydrates in the glucose and fructose in the must converting them to carbon dioxide (CO2) and alcohol. 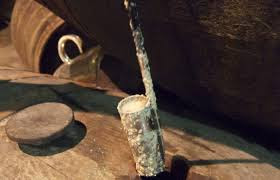 This process takes place anaerobically, but as the environment changes to one with 11-12° of alcohol and a shortage of their accustomed nutrients the yeasts develop a protective film on the cell wall with CO2 bubbles allowing them to float and feed aerobically, and they rise to the surface forming  a film of flor. The butts are not filled completely so the flor has a larger surface to grow on. At first it forms in little white patches (which could vaguely resemble flowers), and fairly quickly spreads to cover the surface of the wine. Naturally the diet needs to change a little so they now start to breathe large quantities of oxygen and consume mainly alcohol, any dissolved oxygen, acetic acid and glycerine. The “guardapolvos” or barrel bungs are designed to fit loosely to keep out dust but allow airflow. 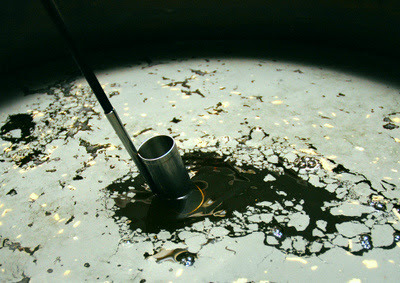 There are four principal sub-strains of Saccharomyces which are found in flor: S. Beticus, which forms flor quickly and is predominant while the wine is still young and S. Montuliensis tends to take over as it ages, with S. Cheresiensis and S. Rouxii playing a more minor but still important role. Yeast is highly sensitive to environmental conditions according to the location, vineyard, bodega and even the butt, so the population can be mixed and vary according to these conditions, which are controlled as carefully as possible by the bodegas. The most important factors are:

Alcoholic strength of between 14.5° and 16°; below 14.5° there is a risk of bacterial spoilage and above 16° would harm the flor.
Ambient temperature of between 15C and 25C. Bodegas are designed to exclude the hot east wind (Levante) and allow entry to the cooler moist west wind (Poniente).
Relative humidity of over 70%. This can be controlled by the use of hoses to wet the albero (gritty sand used on bodega floors) which absorbs and releases the humidity.
Plentiful air supply; the bodegas have high rooves and good ventilation to allow for this and the butts are only filled to 5/6 capacity, leaving headspace.
SO2 content should not exceed 180 parts per million (this is not a great deal – dried fruit contains over 1,000)
Tannin content should not exceed 0.01%. White wines contain much less tannin than reds, and Finos and Manzanillas are made from the first pressing which contains even less.
The pH value should be between 2.8 and 3.5 (potential Hydrogen is a scale of 0 – 14 which measures the acidity or alkalinity of a solution. 7 is neutral and lower numbers represent acidity).
Running the scales regularly provides a little more nutrition and oxygen from younger wine to that in the next criadera or solera.

The changes flor yeasts make to the wine are profound. Over the course of say five years of biological ageing the following are notable. Alcohol is oxidised as the yeast metabolizes it increasing eightfold the content of a compound called acetaldehyde which gives biologically aged wines their characteristic bitter almond aroma. The content of glycerine, a colourless odourless and slightly sweet-tasting by-product of fermentation which gives roundness or viscosity to table wines, is reduced from some 7 g/l to almost none, making the wine very dry and light. Total acidity is reduced by 20%, volatile acidity by 70%, dry extract is halved and alcohol is reduced by half a degree. The wine has now lost its fruity table wine character and transformed itself into Sherry.

During this process the veil of flor has covered the surface of the wine preventing air contact and thus oxidation, keeping the wine pale, but it is by no means static. It gets thicker when conditions suit the yeast best to reproduce in spring and autumn and thinner when they don’t. It tends to be thicker in the coastal towns of Sanlúcar and El Puerto de Santa María with their moist fresh sea breezes, and it is noticeable in the wine which is crisper and zippier than that of Jerez. As time goes by and the flor ages it can lose its white colour and develop shades of grey, and wrinkles, but it still does its job.

As the flor generates new cells, old ones die off and sink to the bottom of the butt. Over time a considerable deposit of cells builds up, known as “cabezuela”. Enzymes in the wine begin to break it down in a process known as autolysis which releases proteins, amino acids and enzymes into the wine gradually giving it a creamier feel and a buttery savoury character which can only be achieved over considerable time, at least eight years. Such wines are known in Sanlúcar as Manzanilla Pasada, but the old Jerez and El Puerto term Entrefino is no longer used. Left for even more time, the slow transpiration of the wine reduces its water content, and as it grows stronger the flor will slowly be killed off allowing oxidation to take place and the wine slowly develops into a natural Amontillado. More commercial ones are produced by simply adding alcohol to do the job. Palo Cortado also spends a brief time under flor, up to a year, and then continues ageing oxidatively. If carefully managed, flor can last up to around 15 years.

Tools used in the bodegas for running the scales are designed to cause the minimum possible disturbance to the flor and cabezuela. For example the “rociador” is a curved tapering tube with perforations at one end used to top up a butt below the flor. The “bomba de trasiego” is a curved tube used to siphon wine from the higher scales, again from below the flor. Used for extracting tasting samples from the butts, the venencia has a curved bottom to the narrow cup on its end so it can be inserted and extracted with minimal disturbance.

When the wine is finally ready for sale the saca will almost inevitably have some flor in it and this could pose stability problems in bottle, quite apart from being unsightly, so the wine has always been filtered - and often too thoroughly. The resulting wine can be a bit paler and have lost some of the character it had in solera, so the arrival of en rama wines, which undergo the absolute minimum of filtration, has been welcomed by connoisseurs.

It is strange to think, given the wonderful flor wines we enjoy today, that until the first quarter of the XIX century flor was considered a defect which made wines thin and weak. It was often mistaken for Micoderma Vini, a film which spoils wine. Wine with proper flor was often disposed of by fortification or turning into vinegar, but as wine science was virtually non existent before the findings of Louis Pasteur, everything was done according to empirical experience and was very haphazard. The proliferation of the solera system at roughly the same time helped as it homogenised the wine which was different in almost every butt in the old añada system. By the 1850s, however, Fino had arrived, thanks to pioneers like Patricio Garvey who took advantage of a change of tastes in Britain, the largest market. Flor wine had, however, been enjoyed in Sanlúcar as early as the XVIII century.

Wines made using flor are almost, but not entirely, unique to the Marco de Jerez. They can be found in various parts of Spain, like Montilla-Moriles, where great wines are also made, and Rueda for example. It can also be encountered in the Jura in France and occasionally Tokaj in Hungary, but it is much less of a speciality.