Until the late XVIII century viticulture, wine trading and indeed the wines themselves in the Marco de Jerez was very different to that we know today. Wine was generally from the most recent vintage as the growers wanted to sell it quickly and avoid any risks of spoilage, so there was little available with any degree of maturity. The growers could sell most of their wine before the next harvest and it was for the merchants who bought it to age it if deemed necessary. In fact the poorer growers sold their harvest before it was picked (sistema de anticipaciones) giving the merchants or their factors a discount and the growers money to cover harvest costs.

This annoyed larger growers as the merchants began to expect discounts from them too, and there arose many conflicts about the capacity of butts, merchants building up stocks and thus buying less and all sorts of other disputes. The ill feeling led the growers to form gremios (guilds) in the 1730s and 1740s which came to impose various protectionist ordenances such as control of wine production and prices, restricting its sale to spring and autumn, the prohibition of growers to also be merchants and that of storage (ageing) by any foreigner or outsider who was not a landowner. 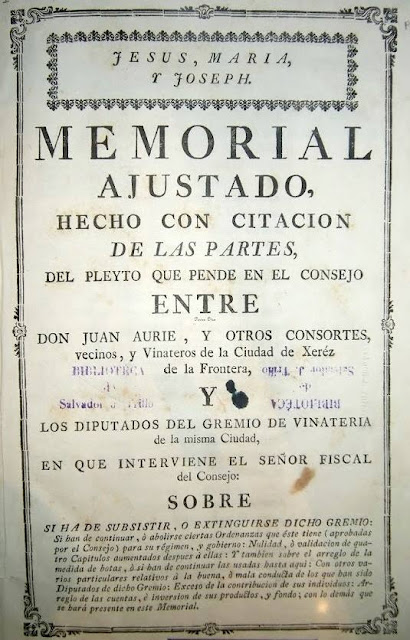 By the 1770s this protectionism, which included fining and even jailing offenders, had become almost farcical as it flew in the face of reality, was often unenforceable and the system had become corrupt. The few big merchants who still existed began to simply ignore it and build large bodegas for ageing, but they decided the Gremios must go, after all considerable sales volume was being lost to Madeira, Málaga etc. In 1773 a group of merchants led by Juan Haurie (1719-1794) made a formal application for the official and legal dissolution of the Gremio of Jerez and after years of hard and complex negotiation a royal decree was granted in 1778 which greatly liberalised trade. This was an extremely important step towards the future of Sherry and is known as the Pleito (lawsuit) de Haurie. The Gremios were finally abolished in 1834.

From this point the Sherry trade began to expand and industrialise; now that wine could be stored and aged, the large “cathedral - like” bodegas began to be constructed, solera systems were introduced and many new styles of wine began to appear - in place of the simple mostos or vinos en claro sold hitherto - which increased in number exponentially by blending. Almacenistas appeared and many Spanish and foreign merchants began to establish themselves. Free trade generated greater wealth, and Sherry entered the XIX century on a roll.

{Juan Haurie Nebout (1719-1794) was a Frenchman who arrived in Jerez in 1731 and became a great friend of his Irish neighbour, Patrick Murphy, who had established a wine business in 1730. Haurie helped him with it and inherited it in 1762. He was a clever businessman and in 1791 he took on his nephews who inherited the firm on his death in 1794. In 1816 Pedro Domecq Lembeye, Haurie´s great nephew arrived in Jerez and in 1818 took over the firm which would go on to greatness.}