José de la Cuesta y Gómez del Corral was born in Torrelavega near Santander in 1824. In search of his fortune, he moved to El Puerto de Santa María and set up a wine business in 1849 which would become very successful. His son, Luís de la Cuesta, later took over the business and in 1894 bought the bodegas of Englishman John William Burdon, established in 1821, when Burdon, who had no children to leave his business to, retired back to England. Cuesta maintained the bodegas and their brands.

José Cabaleiro do Lago, also from the North of Spain, Galicia in fact, established wineries in Chipiona as an offshoot to the family oak timber business in Galicia but gradually became more involved with vineyards, Sherry and distillation. His firm, now called Luis Caballero, decided to move to El Puerto during the early XX century, and the simplest means of doing this was to buy existing bodegas, so in 1932, the firm bought those of José de la Cuesta, located not far from the Castle and those of John William Burdon, already owned by Cuesta.

This move gave Caballero considerably increased stock and allowed him to export in a bigger way. Apart from its own Fino Pavón, Caballero has continued selling Burdon and Cuesta brands to this day but effectively as sous-marques and on certain markets. Burdon is available in Taiwan and Luxemburg while Cuesta is available in markets like Germany and Ireland, simply labelled Cuesta. In 1990 what was by now Grupo Caballero bought Emilio Lustau, based in Jerez, who market Puerto Fino from Burdon/Cuesta soleras and Fino del Puerto from an old Cuesta solera of 183 butts in the Lustau Almacenista range. 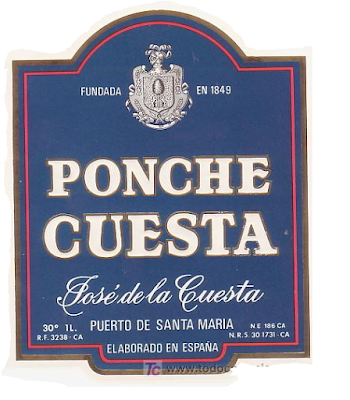 Cuesta was well known for its Troubadour range and also sold Oloroso Melisa, Cream Preferido, Amontillado Queen, Cuesta Moscatel and Vasco Pale Sherry, Ponche Cuesta, Anís, Quina and even a “Scotch Whiskey”. They also did quite well for a while with that British fascination with ceramic Sherry “barrels” with a tap, which could be kept on the sideboard or in the kitchen and which held around 2 gallons (equivalent to 12 bottles). Thankfully they are now consigned to antique shops.