Appearance
Deep brown to mahogany to amber at the rim with cooper highlights.
Nose
Full and quite intense with strong Oloroso notes and perhaps a little PX. You can smell the texture imparted by old Sherry barrels along with hints of vanilla, walnut and toasted almonds. It is rich and generous with hints of antique furniture, brown sugar, caramel and oak, but all in harmony.
Palate
Again full bodied, rich, and fairly powerful, with all the above and mellowed only slightly by gentle sweet notes of caramel, cinder toffee, dried fig and date. It really speaks of the quality of the butts it has been aged in; you can almost chew the oak, yet it is not particularly tannic and leaves a concentrated  Sherried intensity which lasts for ages. Impressive stuff.
Comments

The title Conde de los Andes was granted in 1824 by King Fernando VII to reward the work of the viceroy of Peru, José de la Serna y Martínez de Hinojosa, who came from Jerez. In 1924 the title was elevated to Grande de España, the highest level of nobility below royalty. Unlike this noble lineage, the brandy of that name has a complicated history. It was originally a fine brandy solera, established in 1819 and bought by Díez Hermanos which itself was bought by Rumasa in 1972 and later bought Marqués del Mérito. It was then merged with Zoilo Ruiz Mateos in 1984. When the Spanish Government sold off the various parts of Rumasa in 1985, a Riojan businessman called Marcos Eguizábal bought Díez Mérito, Bertola and Pemartín as well as the once great Rioja bodega Federico Paternina. He re-named the top Rioja wines and the top Jerez Brandy Conde de los Andes. There was also once a Conde de los Andes Brandy Liqueur which was a solera-aged blend of Brandy and PX presented in a similar bottle but with a white label and silver capsule. After Eguizábal’s death his family sold the Jerez interests to the local Espinosa family who have dropped the Conde de los Andes name and now sell the brandy at 15, 25 and 35 years of average age along with a tiny release (100 bottles per annum) of it at 100 years from 14 selected botas “no” and called Reserva Especial.
Price
45 euros, Mantequeria Jerezana 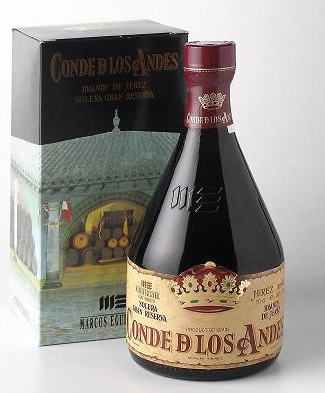