Whisky from the Marco de Jerez?

Towards the end of the XIX and beginning of the XX centuries the bodegas were selling all sorts of products as well as Sherry. The wine of Jerez was beginning to recover after the Phylloxera crisis had forced them to sell other products to survive. All sorts of drinks were produced like Ponche, Quina, Vermouth, Brandy, Gin, Anís etc., and in the days before DOs, many had very questionable labelling, such as “Cognac”, “Ojén” and “Rum”. Two even produced “Whiskey”. 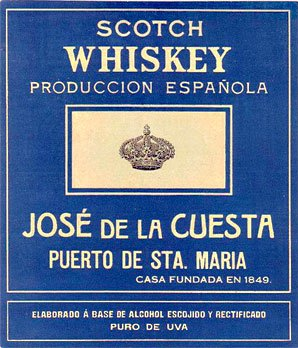 Not only can it not “Scotch” being, as the label says, “Spanish produce”, but it is wrongly spelled for Scotch. In Scotland it is always spelled “Whisky”. Whiskey is the Irish and American spelling. Whisk(e)y can be produced anywhere, but “Scotch Whisky” can only be distilled, aged and bottled in Scotland. Furthermore the label clearly states that it is made from rectified alcohol (ie distilled to within an inch of its life in a column still) produced from grapes, as opposed to the cereals used to make Whisky. Its only saving grace would have been the seasoned Sherry barrels it was aged in. So as fakes go this one was not difficult to spot. The firm is now part of Luis Caballero. 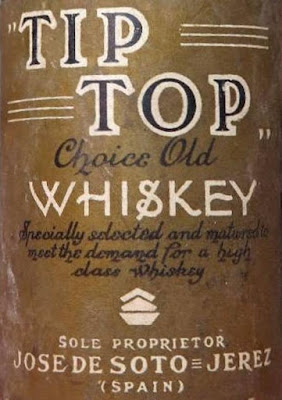 In the mid 1930s this very reputable bodega introduced its own “Whiskey” at the reasonable price of 6.50 pesetas the bottle.  It was “specially made and aged in rigorously selected oak barrels which had contained the oldest Sherries”. The brand was offered in two versions: the standard “Tip Top Choice old Whiskey” with a gold label and the black-labelled version which was supposedly better still. Unfortunately, by the time it was launched the Civil War was at its height, and the product was soon dropped. What it was made from is a mystery, but it is highly likely that, like the Cuesta “Whiskey”, it was in fact brandy. At least Soto did not have the temerity to call it “Scotch” and made much of the fact that it was Spanish. 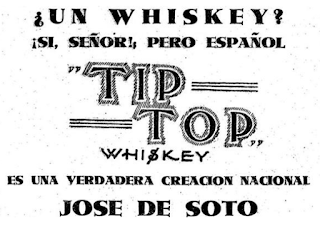 In both cases, the product probably never left Spanish shores, and has long since disappeared, which is just as well, but from an academic point of view it would be very interesting to taste them. Nevertheless, some very good and perfectly genuine Whisky is produced in Spain nowadays. The big one is DYC (Destilerías y Crianzas del Whisky) which was established in 1955 near Segovia, and has successfully produced Malts and blends since then.  It now belongs to Beam Suntory. Then there is Destilerías Liber in Granada who distil various spirits including the Single Malt Embrujo. Last but, I’m afraid least, is Pernod Ricard’s Doble V distilled near Tarancón and also Argentina. It was set up by Hiram Walker in the early 1970s.