Bodegas Hidalgo La Gitana have patented a system for serving Manzanilla La Gitana on draught, like beer. It consists of a 16 litre bag-in-box beneath the counter which feeds chilled Manzanilla to a bar-mounted dispense-tap in the shape of a large bottle of La Gitana. The firm invested 100,000€ in the system, and it almost floundered with the Consejo Regulador’s ban on BIB, but the Junta decided to allow it in the catering trade.

The firm is careful to protect its image by only offering the system to better quality bars, and over 270 are now using it. It has been very successful; some say they were selling the equivalent of 40 cases a year before, but are now selling 400. Most of the systems are to be found in bars in Andalucía, while some 10 bars in the USA have them as does the Sherry Club in Ginza, Japan. Hidalgo’s excellent single vineyard Manzanilla Pasada Pastrana is also available, luckily not quite so cold, on draught in one Sanlúcar establishment; Restaurante Puerta de la Victoria, a few steps from the bodega itself. 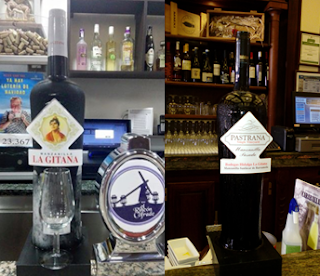