José Alonso y Pajares founded a bodega in El Puerto de Santa María in 1870 in the Calle Postigo on the corner with Calle Santa Fé. He operated successfully as an almacenista and exporter and while the bodega was small it was busy, sending its wines and spirits all over the world. In fact he won various medals and diplomas for quality at exhibitions in Europe and America, and supplied more than one royal household.

Wine was sold in bulk under the style J Alonso and in bottle under the style José Alonso Pajares and was as natural as possible, something he made a feature of. Labels for the bottles were produced by the best designers and printers in Paris, Málaga and Jerez. The range of Sherries was considerable, with all the standard styles as well as Manzanilla Fina and Moscatel Superior and Vermouth. Various other lines were produced in their own small distillery: Anís, Ojén (a style of anís made famous in Ojén (Málaga). They even had the nerve to promote their “Cognac Fine Champagne” at the great exhibition in Paris, while they also sold red and white table wine from La Mancha. 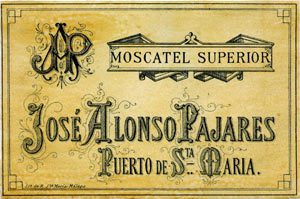 José was married to María de los Dolores Ruiz de Cortázar y Calderón but since they had no children she inherited the bodega after his death using the name Viuda de Pajares until her brother José A Ruiz de Cortázar Calderón took over, reverting to the name José Alonso Pajares and adding “Sucesor José A Ruiz de Cortázar” by 1902. He also moved to premises in Calle Albareda, and interestingly was married to one of the daughters of the bodegueros Adolfo and Manuela Tosar. At this time there were no fewer than 25 bodegas, 8 distilleries and 18 cooperages operating in El Puerto; how times change! After  José's  death in 1937 the business was wound up. 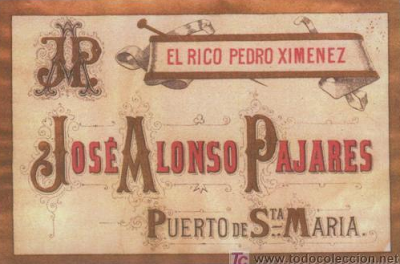