Appearance
Mahogany with copper highlights fading to amber.
Nose
Complex and refined, it has developed a bouquet of subtle nuances like oak, nuts, Oloroso, caramel and vanilla all nicely melded together. It might contain some aguardiente, but not much, this is mostly holandas and it has an air of quality.
Palate
Very smooth and quite rich with hints of dried fruit and caramel rounding it off. It holds the alcohol well too, which helps, and there is a gentle texture. There are gentle brown sugar and orange peel notes and there might be a trace of sweetening (perfectly legal) but it has been well done, and the Oloroso is not excessive. Long, harmonious and very satisfying.
Comments

The soleras for this excellent brandy were established in 1860 by the now lost firm of Pedro Romero in Sanlucar, and they were bought by Francisco Yuste after Romero went bust. The brandy itself has an average age of nearly 20 years, spent in butts made from American oak from Costa Rica. I'm not sure if it is named after Pedro Romero or after King Pedro I of Castilla and Leon, a XIV century monarch known as "Pedro the Cruel" or "Pedro the Just" depending on which side you were on.
Price
32,60 euros, Licores Corredera 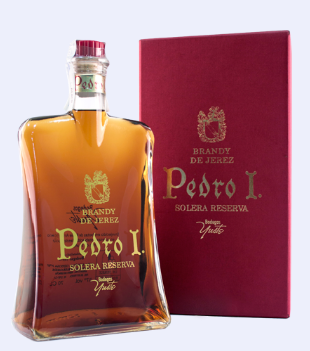