Just to give you an idea of how wonderful the people of Sanlúcar are, here’s what happened at the weekend. I had booked to attend iNNoble, an unmissable event full of small wine producers, and the Día de la Manzanilla in general. After hours trying to find accommodation I finally secured it at Hotel Barrameda, only to arrive and find I’d stupidly booked for July, not June. Marta, the receptionist, was extremely kind and phoned all the hotels, pensions etc. on my behalf, but without success. At least I have a room booked for July. 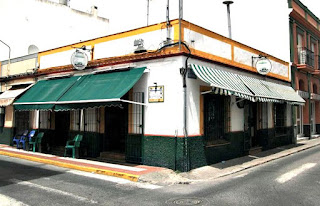 So I decided to go to Taberna er Guerrita (above) and consider what to do over a glass or two of their excellent Manzanilla. Having succumbed to the temptation of Armando’s little shop, I got talking to some local chaps and my predicament soon came out. After buying me another drink, Juan said not to worry, he knew of a chap who was installing a few rooms in his delightful bodega/bar, and in no time we were in his car en route to La Herrería (below) in the Barrio Alto. 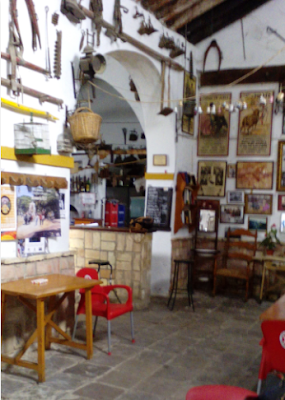 The owner, the charming Félix, did indeed have a room which, though not 100% complete, was more than good enough, especially at the price, and what’s more he could offer food and drink, even parking. He showed me a great bar called Ke Arte with lots of live flamenco, so I spent some time there and ended up going for a paseo with some of its customers! Back at Félix' bar we got talking and I mentioned I should really move to Sherryland instead of endless driving, hotels and speeding tickets. Then he introduced me to a man in the property business who might well have something suitable. A few drinks later and we’d arranged to meet up.

Next day was iNNoble at the Posada del Palacio which was fantastic (see separate post), and after the morning session and an excellent lunch with Borja of the Tienda del Jerez and his wife, I returned to my room for a siesta. At around 6.30 I was awoken by my name being shouted from the patio. I rushed downstairs to find Fernando Angulo of Viticultores Alba waiting with a sample already poured. And what a sample – completely hand-made sparkling Palomino which was his best yet.

We hopped into Fernando’s car which took us to the second session of iNNoble, not slowly, but there was no time to waste. As we arrived we noticed the sky was a very odd colour and we speculated about everything from a storm to the end of the world. It was only later, over a drink with Borja that we noticed ash falling from the sky, and it turned out to be from a very serious forest fire in Huelva – some 70 kilometres away – but it was threatening the Coto Doñana. It destroyed 10,000 hectares in the end, but thankfully Doñana was saved. 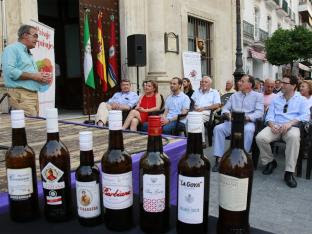 Then there was a tasting of, you guessed it, Manzanilla, in the Plaza del Cabildo led by none other than Antonio Barbadillo, which was well attended and great fun. As the benefits of the siesta wore off I repaired to nearby Barbiana for a nightcap and some Ibérico ham before tackling the steep Cuesta de Belén back to the Barrio Alto, and an extremely sound sleep.

Monday morning, began with a visit to Covisan, one of the wine cooperatives where the capataz himself showed me round the bodegas. Unlike some bodegas they actually make the wine here using impressive modern equipment; a sea of stainless steel tanks, presses and filtration plant. They also have an ageing bodega with huge soleras mostly for Manzanilla, but also Amontillado Oloroso and PX. The coop supplies wine to many bodegas as well as having its own brands. We had a great conversation about BIB, the Consejo, the coming harvest and many other matters. Viva Sanlúcar!