Manuel Antonio de la Riva y Pomar was born in Ruiloba (Santander) in 1838. Aged only 20 he moved to Jerez and bought an old bodega established in 1776 in Calle Arcos, opposite what is now Lustau. It contained some excellent old wines and would establish his reputation.

He married the jerezana María Guadalupe González de Tagle y Villar and among their children were two noteworthy daughters; Petra (1882-1956) who would marry José Domecq and live in great luxury, daily attending San Marcos church, where it is said the priest could not begin the mass until she arrived. Guadalupe was famed for her beauty and was presented to King Alfonso XIII during a visit to González Byass in 1904. He was impressed but aged only 18 and later married Victoria Eugenia of Hapsburg.

The firm was comparatively small but prestigious thanks to its extremely old and very fine soleras, and it owned 53 hectares of vineyard next to that of Agustín Blázquez in the Pago Macharnudo including Viña La Riva and Viña Sabel (now belonging to Grupo Estevez). Bodegas La Riva are credited with the introduction of “deserpia”, the digging of a square depression round the stem of the vine to catch rainwater. 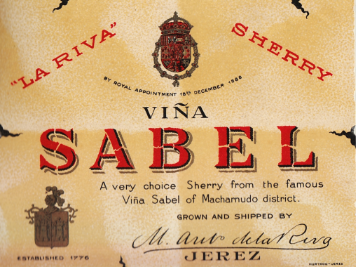 Manuel Antonio was a great defender of the interests of Jerez, proposing an entity which would fight for the prestige of Sherry and coordinate the efforts of its exporters.  He was thus chosen as honorary president of the chamber of commerce in 1902, and served as a member of the Cortes (Spanish parliament). When he died in 1909 he was a much respected man. 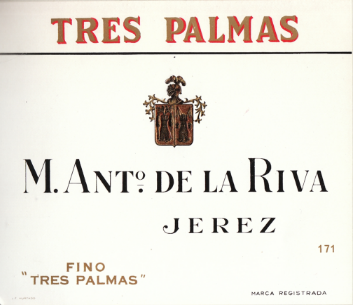 Manuel’s sons continued with the business, changing its name to MA de la Riva & Cia. in 1923, based at Calle Alvar Nuñez and in 1958 it changed again to MA de la Riva SA. In the early 1970s the firm was bought out by Domecq, who were in an acquisitive mood then, perhaps to add value to the firm to avoid takeover by Rumasa. La Riva was still run, at least for a while, by the La Riva family who were of course related by marriage. Gradually however the soleras were moved to the Domecq installations, and gradually the following famous brands disappeared.

The brand was resuscitated in 2017 by Ramiro Ibáñez and Willy Pérez as M Antonio de La Riva SL. They wanted a respectable brand name for their new and very exciting Sherry project. Please see separate post.
Posted by Paula MacLean at 15:51