Sánchez Romate are organising another music competition for young people who will play in various streets and squares of Jerez, either as soloists or in groups. It will be under the banner of the firm’s Unusual Sherries range, which is rarely seen on the home market, and it begins on 7th July and every Friday for the rest of the month. The final will take place during the Fiestas de la Vendimia (1-17 September) and the winner will record a mini concert at the Sánchez Romate bodegas. 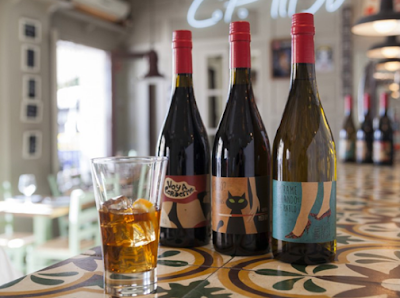 Bodegas Hidalgo La Gitana have launched a special Manzanilla in celebration of their 225th anniversary. Manzanilla La Gitana Aniversario makes a return to the original label and there are only 1792 bottles, one for each of the firm’s 225 years.

Viña Callejuela have launched 3 new table wines from different albariza pagos.They are Hacienda Dona Francisca (Callejuela), La Choza (Macharnudo) and Las Mercedes (Añina). A brief tasting showed them to be excellent. More later. They are also about to bottle the 3rd release of their vintage 2012 Manzanilla (3/11), the only one there is, but being from one butt there won’t be much…

Williams & Humbert’s February 2017 saca of the 2009 vintage Fino is now available in a smart new 50cl bottle which reflects the house style. It is lovely!

The Spanish Federation of Spirit Drinks (FEBE) has been holding its general assembly in Jerez along with the European Confederation of Spirits Producers, of which FEBE is a member. According to the latter’s figures, Spain produced 214 million litres of spirits in 2016, a good proportion of which was produced in Andalucía, and of which 60% was exported.

The Consejo Regulador has long been working on a definition for “en rama”. While use of the expression has been allowed on labels, different bodegas have different ideas, and some wines are bottled without any stabilisation whatsoever, while some undergo at least some treatment. Each bodega has its own way, and agreement is still not proving easy. 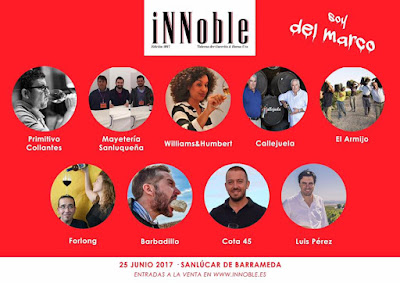 Armando Guerra of the famous Taberna Der Guerrita bar in Sanlúcar and Barbadillo has organised a great all-day festival of wine and music called Innoble. It takes place on Sunday 25th June from 11.00 am till 11.00pm at an old bodega belonging to Rodriguez Lacave which is the events space of the hotel Posada del Palacio at Calle Caballeros, 11, Sanlúcar. There will be many top people there like Paola Medina, Ramiro Ibáñez, Willy Pérez, Rocío Áspera and Alejandro Narváez of Forlong, the Blanco brothers of Callejuela, El Armijo, Mayetería Sanluqueña and Primitivo Collantes. Bodegas from other parts of Spain will also attend along with Niepoort from the Douro. The fun will include a blind tasting competition. Tickets are 50 € from www.tabernaderguerrita.es/catas-2017

A new wine book has just been published called Los Nuevos Viñadores by Luis Gutiérrez, the Wine Advocate’s Spanish wines expert. It looks at 14 members of the new generation of winemakers around Spain and their amazing work in recuperating old grape varieties, focusing on the land and its history, and their imaginative and creative passion for expressive wines. Jerez is represented by Eduardo Ojeda of Grupo Estévez and Equipo Navazos. This really interesting book is in Spanish, but it is bound to be translated soon. Luis will be at Taberna Der Guerrita in Sanlúcar to talk about it and taste some wines on the 7th July at 20.30, see www.tabernaderguerrita.es/catas-2017
Posted by Paula MacLean at 15:35