Nose
Crisp and light in style yet reasonably aromatic with notes of cornflakes and wine, light on the oak - not the usual heavier Oloroso - more Amontillado with a light trace of honey and hazelnut. Really quite elegant.

Palate
Gentle caramel sweetness at the start then those corn and honey notes which balance with a hint of tannin giving character and good length. Open, straightforward and surprisingly easy drinking.

Comments
In the heyday of Agustin Blazquez, founded in Jerez in 1795, this was a leading commercial Brandy de Jerez. It was their basic brandy, above which figured Toisón de Oro and Anticuario, all of which, unusually for a Jerez based firm, were aged in bodegas in El Puerto. The firm was taken over by Domecq in 1973, and after Domecq itself was taken over, Osborne bought some of the brandies - Carlos I, Carlos III and Felipe II. In recent times this decent quality brandy has been converted into a "bebida espirituosa" sold at 30% and while cheaper, it is certainly not what it was. So it was sheer luck and a great pleasure when I chanced on this bottle of "real" Felipe II. 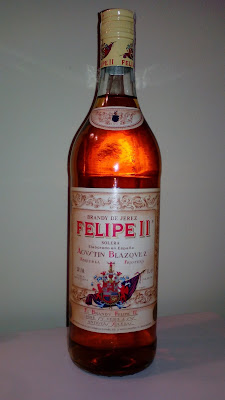