Nose
Full and forthcoming with toasted almonds, walnuts and hints of pasas and caramel offering a slightly sweet note, all well integrated with Oloroso and the oak of its barrels giving a distinct character.

Palate
Big and assertive with real character, and the classic hallmarks of Brandy de Jerez: nuts, oak and a hint of Oloroso-tinged caramel sweetness. There is also a trace of orange peel and that velvet gloved power from years of oxidative concentration and refinement.

Comments
The name of this fine brandy refers to the French occupation of much of Spain by Napoleon's armies and the installation of his brother Joseph Bonaparte as king (1808-13). Jerez itself was occupied for nearly three years between 1810 and 1812 and there was much abuse of power, leading bodegas to try and hide as much of their product as possible. If things were bad for the Spanish, they were worse for those French who had set up bodegas in the area. Osborne also used to sell an Amontillado called Independencia, and their Oloroso Bailén was named after a famous Spanish victory over the French in 1808. The faint image on the brandy label is reproduced from a painting of a Napoleonic battle by the famous Spanish artist Joaquín Sorolla. For a while Osborne had a picture on the label of King Fernando VII who reigned after they got rid of Joseph Bonaparte. Anyway this brandy is made from holandas and aged in Oloroso butts. 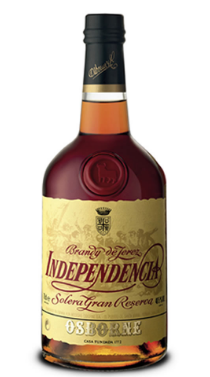