One of the outstanding events during International Sherry Week in Jerez was a “vertical” tasting of the magnificent Fino Imperial VORS at Bodegas Diez-Mérito. A vertical tasting usually involves various vintages of the same wine, something rarely posible in Jerez because of the solera system, but this tasting looked at how the wine develops through the five criaderas into the finished product, which is in fact an Amontillado, but a super elegant one. The firm´s oenologist, José Antonio Portales, helped by María José de la Torre who organises visits, led the tasting which took place in DM´s beautiful old Bodega Bertemati built in 1790. Amidst the occasional bat flying around and the presence of a local TV crew the tasting was a friendly and fascinating affair. 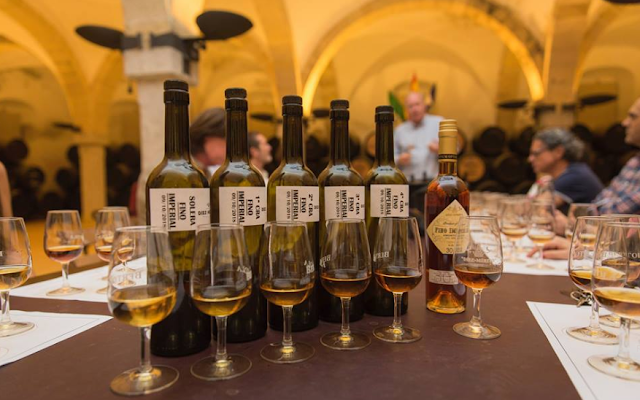 Diez Hermanos was founded in 1876 but this wine´s origins are older still, the solera having been established in 1793, possibly by Ysasi, and bought by Diez Hermanos in 1900. Traditionally the fifth criadera was refreshed with Manzanilla but that practice ceased some time ago and it is now refreshed with mature Fino. The writer Federico Oldenburg neatly describes the wine as “El Fino más allá del Fino” (The Fino well beyond Fino). The reason it can legally be called Fino is because the Brand name was well established long before the Consejo Regulador. In 1979 Diez Hermanos merged with Marqués del Mérito forming the successful Diez-Mérito, but it was taken over by Rumasa in 1981 and later by Paternina, creating a rather gloomy period. Luckily, in 2016 the local Espinosa family bought the firm and restored it to its former glory. 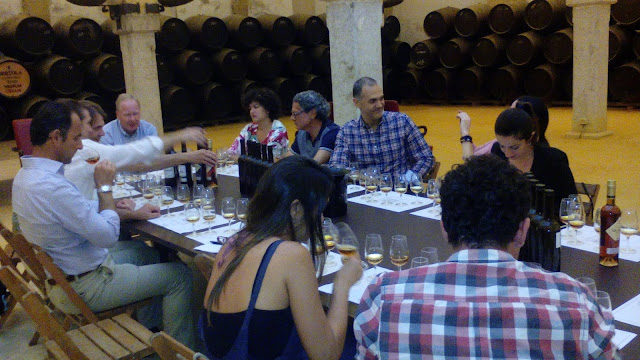 One of Fino Imperial´s great attributes is that it is one of the incredibly few natural Amontillados. This means a number of things: no second fortification takes place to kill off the flor, the wine develops at a slower pace, the final alcoholic strength will be slightly lower than in wines which did undergo a second fortification, and the result will be very elegant. The number of butts in the criaderas might look odd, but one should remember that butts containing Fino are filled to a lower level to give the flor airspace, so more butts are needed. Once the flor is no longer present, they can be filled to the top but there is of course evaporation loss, estimated at 5% per annum, so fewer butts are needed.

Each sample was a delicious wine in its own right, opening out beautifully in the glass, but it was enlightening to watch how they develop into such a great wine. There were considerable differences between each, but then this solera is run slowly, after all it takes the wine over 30 years to work its way through. Sacas are few and small, something like 100 litres at a time, and the wine is filled into 50cl bottles with just a very light filtration as no fancy stabilisation is required.  This tasting really demonstrated the enormous amount of work and skill that goes into a top quality Sherry, and what amazing value for money it is.