GB have launched two new vintage Finos to add to their range of Vinos Finitos. They are Fino Añada 2010 and Fino Añada 2011, both made from grapes grown in the pagos Carrascal and Macharnudo. The wines were aged statically for 8 and 7 years respectively in the bodega La Constancia, and apart from one year of age the main difference between them is the vintage. The wines were first presented at the recent Tio Pepe Sherrymaster event by Pitu Roca, sommelier of the legendary restaurant Can Roca, and described by the firm as “another example of innovation looking towards the past”. “Finito” means finite, as there was only one butt of each wine. They come in individual wooden boxes at 29€ each ex bodega or double ones with a 50 cl bottle of each vintage.

2010 was a slightly cooler year than usual with much higher than average rainfall. High temperatures and the Levante only appeared a few weeks before the harvest which totalled just under 70 million kilos with an average sugar reading of 11.44° Beaumé. The bodega describes this wine as “purified flor” and it has 16%/vol.

2011 saw more normal rainfall and hotter weather especially in July and August producing a smaller vintage with just under 64.5 million kilos with an average sugar reading of 11.72° Beaumé. González Byass describe this wine as “bottled albariza” and it is 15%/vol. 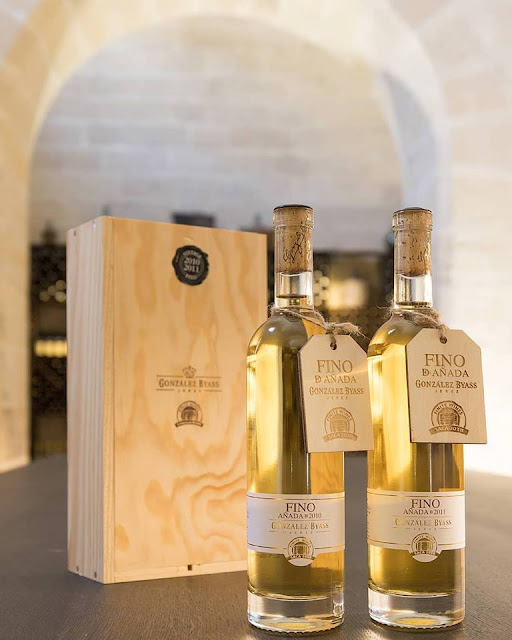