The judging panel of the Junta de Andalucía department of Agriculture, fishing and rural development has announced its 2017 prizes, which recognise the work and innovative spirit of companies, organisations, professionals and individuals in agriculture, cattle ranching, fishing and food production, will be awarded in November in Almería. The winner in Cádiz is Bodegas Luis Pérez for their important and tireless work in the recuperation of the traditional types of wine and attracting public interest in them, the digitalisation of all the pagos of the area using written accounts, soil analysis, satellite imaging, temperature and rainfall statistics among other means.

Part owned by the Showering family who once owned Harveys, Melius Drinks is promoting Pedrino, a sophisticated low alcohol (5.5°) sparkling mixer drink, which can of course be enjoyed on its own. There are three versions, based on Vermouth, Port and Sherry, and the latter uses Pedro Ximénez supplied by Diez-Mérito. Pedrino is far less sweet than PX and works fantastically well with gin as it is a blend of PX, tonic and citrus botanicals. It comes in 200ml bottles and is already available in the US, Holland, UK, Germany and Spain, where Diez-Mérito launched it at Vinoble. 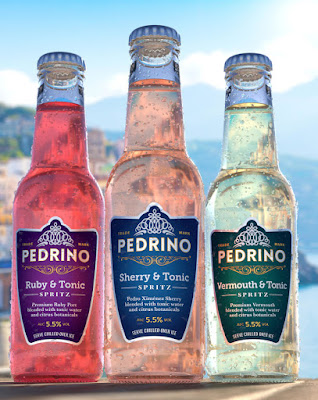