Appearance
Mid strawy yellowy gold with golden highlights.
Nose
Fresh with hints of sea breeze herbs and yeastiness then develops that lovely bitter flor character along with salty, briny mineral notes and traces of esparto, even cabezuela. It could almost be a Manzanilla Pasada and is definitely more serious than the price would suggest.

Palate
Quite full, very dry with comparatively low acidity which is made up for by that flor. There are slightly buttery almost rancio notes which along with that esparto note give depth and texture and while the flavour is fairly intense the wine still retains its freshness and has very good length.
Comments

This new brand of Fino, launched in November 2017, comes from the Cooperativa Vitivinícola Albarizas, established in 1977 in Trebujena. To celebrate their 40th anniversary they bottled some wines for the first time: Fino, Amontillado, Oloroso, Mosto and a white called Bijuré. Since the coop is located in the production zone it cannot therefore carry the word "Sherry" on its label. It is made from 100% Palomino grapes from the 200 coop members' 300 hectares of vineyard, most of which is sold to Williams & Humbert and Grupo Estévez. The brand name refers to Alonso Pérez de Guzmán "El Bueno" who founded the Medina de Sidonia dynasty in the XIII century. As is sometimes the case with cooperative labels, the design is a little doubtful, but the contents make up for it spectacularly, and at an absurdly reasonable price. It was bottled en rama with a driven cork.
Price
3.50 per 50 cl, Licores Corredera 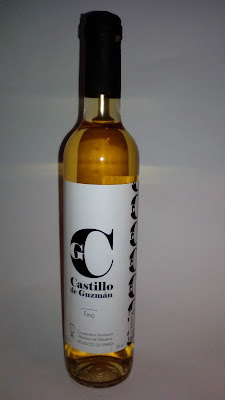