The fungus, which dries out and kills affected vines, was first detected in Sanlúcar two or three years ago and has already reached Jerez. It has been detected mainly in the wood of the rootstock most commonly used in the area, 161-49 Couderc, onto which Palomino scions are grafted, and is concentrated in new plantings or replacements from their second year. The first hypotheses being considered by vineyard experts trying to determine the origin of the problem point to the nursery but it is only a suspicion so far. Other less probable hypotheses like exhaustion of the vineyard due to climate change or another: the feared Xylella Fastidiosa which has wreaked havoc in some areas of Spain, particularly in olive groves, seem to have been discounted.

Vara y Pulgar, a firm specialised in technical vineyard advice, released a report last July titled “Loss of Vines in new Plantations” in which they gathered data on the affected vineyards in Sanlúcar which on a visit with the vineyards’ owners “growers with huge experience of vineyard husbandry”. Samples sent to the laboratory showed a lack of incidences, so Vara y Pulgar conclude in their report that “we don’t know yet what is happening, only where and to whom”, alluding to the location of the problem in plantings of 161-49 in the Sanlúcar area “a privileged area for vine growing” and in which the rootstock used is “a guarantee for that type of soil”.  According to the report, the damage is centred in the pagos Miraflores and Carrascal and there is a “surprising lack of symptoms in new plantings in Jerez and other areas of Sanlúcar such as Mahina, Cabeza Gorda and Callejuela”. It was probably happening in 2017 and according to the president of the independent growers’ association Asevi-Asaja it has already extended to Jerez but there fewer have noticed it, either because the vineyards are more extensive or because they have paid less attention so far. 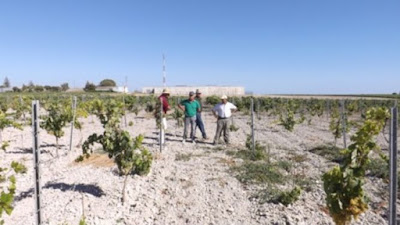 The Consejo Regulador has no record of the problem, but the Rancho de la Merced, the Junta de Andalucía’s agricultural research station is in continuous contact with Vara y Pulgar and they will get down to work as soon as the harvest is over. Both men recognise the growers’ fear of a disease they don’t know and therefore have no answer to. Conventional treatments which work on mildew and oidium whose spores are windblown don’t work on this. 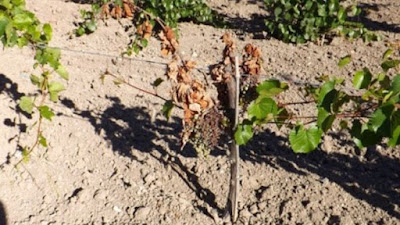 The first trials of ozone treatment took place recently and gave good results but the jury is still out as the vineyards used in the tests had already been treated conventionally. In their report, Vara y Pulgar note a growing incidence of chlorosis in new plantations which does not respond to the normal treatment with iron, and also a lack of vigour in cuttings and fewer buds during flowering, symptoms only found with the 161-49 rootstock, although Asevi  say they have observed the problem in others. According to the Vara y Pulgar report, the symptoms are mostly to be found in two to three year old plantations – in younger ones they are more difficult to spot – and to a lesser extent in four to five year old plantations. One affected vineyard they visited had looked great just last year.