Appearance
Very deep blacky walnut brown fading to amber with copper glints.
Nose
Full, forthcoming, quite complex and characterful with pronounced oak notes and lots of super ripe fruity PX fig, date and raisin aromas, yet it doesn't smell dramatically sweet - rather one gets the raisin smell and texture which is nicely melded with the oak and the spirit. There are aromas of nuts toasted in caramel, walnuts, toffee, chocolate and a balsamic hint. A really good nose.
Palate

A little more sweetness now, that of dried fruit but much less tannin than expected. It is super smooth and very rich with a gentle bite from the spirit, feeling more viscous than many brandies, but very tasty. There are traces of liquorice along with the dried fruits and hints of nuts, and it lines the palate with flavour and texture which lasts for ages.
Comments

The Moors occupied Jerez for 553 years and inevitably the locals learned a few things during that time. One was distillation, an art which would later spread throughout Europe and perhaps reach its zenith in Cognac. This brandy is named after a French general, simply known as "Louis GS", who came from Cognac and fought in Spain in 1809 during the Napoleonic wars. It seems that he passed on some of his wisdom and experience to the locals which helped improve the quality of their brandy.  If only more French soldiers had been so philanthropic! It is a good story, but this brandy could not be more Spanish. It is basically the same spirit as the Dios Baco Solera Gran Reserva which is aged in Oloroso butts, but for Luis Enrique some of this goes on to be further aged in butts seasoned with Pedro Ximénez from the excellent Oxford 1970 solera. This results in two completely different brandies, this one being available only in limited quantities.
Price
37.50 Licores Corredera 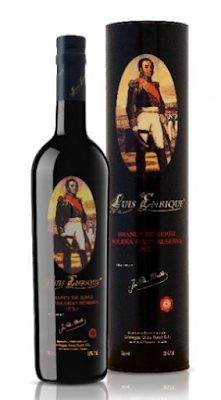