Appearance
Deep walnut tinged mahogany with gold and copper highlights and a trace of green at the rim.
Nose
Intense and aromatic with a wealth of nuances. An attractive caramel and raisin sweetness greets the nose, then there are notes of dried fig, date, prune, oak, dried orange peel, spice and traces of Oloroso and PX, but with a brandy of this age many nuances are melding together to form an outstanding and complex bouquet.
Palate
Full and super smooth with remarkably little tannin, but a great deal of flavour. It coats the mouth generously with a gentle sweetness and develops powerful notes of dried fruits, traces of nuts, toffee, oak, leather and tobacco. It has real layers of flavour and an extremely long and fairly dry finish.
Comments
This superb brandy was introduced to commemorate the arrival of the new milennium with something special and is available in limited quantities in numbered bottles. It has an average age of at least 25 years. A parcel of the standard Cardenal Mendoza, already a Solera Gran Reserva was set aside for extra ageing in 1981, the bi-centenary of the founding of the bodega. It was put in mainly old Oloroso and a few PX butts till it had an average age of at least 25 years. The name Carta Real commemorates a dinner at the Royal Palace in Madrid in 1900 when wines and brandies from Sánchez Romate were served. In fact the owner of the bodega at the time, Juan Manuel Sánchez y Gutiérrez de Castro was also a minister to King Alfonso XII who elevated him to Duke of Algeciras for his efficiency in organising an international conference there.
Price
Around 70 euros 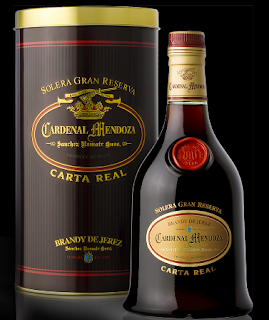