Appearance
Pure amber with coppery gold tints, fading through yellow to the slightest trace of green, legs.
Nose
Toasted almonds and hazelnuts, traces marzipan, turron,wood, damp barrels and that glyceric implied sweetness along with a faint traces of cinnamon on toast, very complex and draws you in - willingly! You could just sniff this for hours.
Palate
Full and dry with a trace of wood astringency which is balanced by that glyceric feeling of roundness or even implied sweetness. Plenyt of nuts, mainly almond and hazel, but a hint of walnut too.
Comments
This is one of the classic old Domecq brands which were bought by Lustau in 2008. The Botaina solera was laid down in 1918, and the wine is about 18 years old. It is basically La Ina Fino allowed to age and lose the flor, thus developing amazing complexity. It is worth noting that the Lustau chief oenologist, Manuel Lozano, who looks after these soleras, has won the IWSC award for best fortified winemaker five years running. The name Botaina refers to Antonio Botaina, once the owner of the vineyard which supplied the grapes for this wine.
Price
About 16-18 euros in Spain, around £15-16 in Britain. Imported by Bibendum 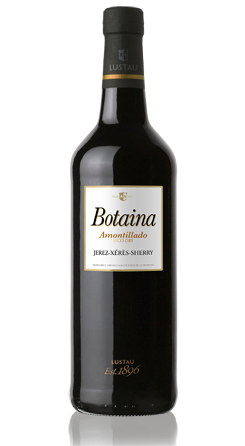