Unlike the history of many Sherry bodegas, that of Croft lasted only 32 years, but in that short time, a whole new style of Sherry came about. Croft was – and is – an important Port house, and one of the oldest, being established in Vila Nova de Gaia in 1678 (although established in York in 1588). The firm began in Portugal as Phayre & Bradley, two expatriate Irishmen, but as was the case in those days, the name changed fairly frequently as partners came and went. In the XVIII century it was called Tilden &Thompson when John Croft, from York, married Frances, Thompson’s granddaughter, and joined the firm in 1736. The first ever Vintage Port was produced by the firm in 1781. By 1827, the firm, now known as Croft & Co. was the 4th largest Port shipper, continuing to grow with the acquisition in 1889 of the Quinta da Roeda estate, which is still central to the firm.

Meanwhile, the Gilbey brothers, Walter and Alfred had come home from the Crimean War in 1857 and joined with their older brother Henry, a wine merchant in London. Together, they were extremely successful, shipping wines from South Africa, and expanding into many other styles of wine, including Bordeaux (where they bought Chateau Loudenne), Madeira, Port and Sherry. They were soon distillers as well, producing Gilbeys Gin and later acquiring two Scotch Whisky distilleries. In Jerez, they kept extensive stocks of Sherry, looked after for them by Gonzalez Byass. The connection between the two families was close, and various Gilbeys intermarried with the Gonzalez family. 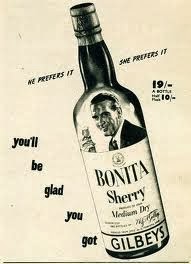 Gilbeys had enjoyed great success with their Invalid Port brand, and later Triple Crown, which were supplied by Croft, and in order to guarantee future supplies, Gilbeys bought half the shares in Croft in 1892, and bought the rest in 1911 on the death of John Frederick Croft. As for Sherry, they marketed brands such as Gilbeys Listan Pale Dry Amontillado, and Bonita Medium-dry. They went on to merge with United Wine Traders in 1962, forming International Distillers and Vintners (IDV). Soon, they bought another old Port firm, Delaforce. The IDV brands are world famous: J&B Whisky, Smirnoff Vodka and Baileys’ Irish Cream Liqueur are amongst the best known. In 1972 the brewers Watney Mann bought IDV, and the combine was bought by Grand Metropolitan Hotels shortly afterwards. Then in 1997, Guinness, who had already bought the Distillers Company (DCL) merged with Grand Metropolitan to form what is now known as Diageo, the world’s largest drinks company.

During the IDV days, the firm was based at Harlow in Essex, where they had an office which spent its time thinking up new brands. In the late 1960’s, when Sherry was still selling like hot cakes, they had observed that Sherry drinkers erroneously assumed that dark Sherry was sweet and pale Sherry was dry. They also noticed that it was regarded as more up-market to be seen drinking dry Sherry. Following the notion that one should find out what the consumer wants and then make it, they therefore set about creating a pale sweet Sherry. This would become Croft Original Pale Cream. In order to do this, they needed to re-organise their Sherry interests and it was decided to use an existing well-known brand name, and so Croft Jerez SA was constituted on 25th May 1970.

At first the firm rented bodegas near the bullring, close to Williams and Humbert in Calle Circo, until a top architect, Vicente Massaveu, was commissioned to design a new bodega complex, which was completed in 1979 just outside Jerez on a 300,000 square metre site on the Carretera de Circunvalacion. It was impressive, with all modern conveniences inside, while keeping a traditional appearance on the outside, and was christened Rancho Croft. It had two of the latest continuous presses, refrigeration and filtration equipment, as well as ranks of stainless steel tanks. No less than 50,000 butts were stored here, and yet the plant was so efficient that only 60 people were needed to run it. The company also owned 370 hectares of vineyards as well as buying in grapes from growers.

The wines came from three sources: the old Gilbey soleras, such as Doña Gracia, Picazo and Los Graciosos; wines which were bought in, some possibly from Diez Hermanos, who had a stake in the firm until 1977; and those they produced themselves. As to winemaking, the firm was progressive, introducing not only the first Pale Cream: Croft Original, but also the first Pale Medium: Croft Particular. They were made in roughly the same way, by blending Fino or young Amontillado with concentrated must which had been charcoal filtered to remove any colour. These wines were new and could be served chilled, and soon developed a huge market. Before long, nearly every other bodega felt the need to introduce a Pale Cream to their range. Croft Original soon became the world’s second best-selling Sherry after Harvey’s Bristol Cream. 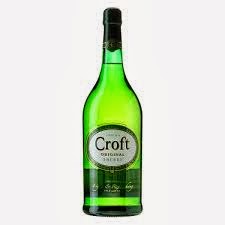 Croft did produce other Sherries, however. There was a very refined and elegant Fino called Delicado, Croft Classic was a traditional and very good Amontillado, a good Palo Cortado, and an old Oloroso from a 140 year-old solera. There was also a good brandy.

The end of the 1970’s saw the beginning of a long and painful decline in the fortunes of Sherry, and many multinationals began considering their position. By the end of the 1990’s, Diageo was known to be keen to divest itself of its fortified wine interests, and to raise cash for a deal with Pernod Ricard to buy parts of Seagram, and in September 2001 they sold Croft and Delaforce. The Port interests went to Taylor Fonseca, and the Sherry interests went to Gonzalez Byass, who felt the deal would help to increase sales in the UK and beyond. They paid 9 billion pesetas (54 million euros) for the bodegas and wines, which were transferred to the GB bodegas, with the exception of certain anadas which were bought by Javier Rivero for his Bodegas Tradicion. GB really wanted the Croft Original. They already had their own brand of Pale Cream, San Domingo, but Croft had a much larger market, especially in the UK, and San Domingo was quietly dropped. Of the original brands only the Particular and Original survive, now made in GB’s facilities, though they do market a Fino Delicado under the GB name. Croft Original is still, however, to be found in nearly every wine shop in the world, some measure of the brand’s success.

The magnificent Rancho Croft, also owned by GB was sold for 6 billion pesetas (36 million euros) to a property developer in 2004 but it was left abandoned till a plan to build 600 dwellings on the 30 hectare site was approved, and that only happened in 2009. It seems to have fallen through however as more recently there have been plans to use the site as a new location for the law courts, though that has also seen unproductive comings and goings....