Festivities begin on the 21st with an official gala and a host of events with Sherry at the centre. Jerez city council’s tourism councillor, Antonio Real, and Beltran Domecq, president of the Consejo, yesterday presented the programme of events after a meeting of the organisation committee. Real remarked that the gala coincides with the I Ibero-American Wine Forum and the start of the Jerez Festival. There will be many events open to the public, such as the toast to Jerez City of Wine 2014, which takes place on Saturday at 1.30 in the Calle Larga, to which he invited locals and tourists alike to join in with a copita of Sherry.

The official programme begins with the signing, at the Atalaya, of the protocol of adhesion to the European programme “Wine in Moderation”, and those present will be the Jerez Council, the Ruta del Vino y Brandy de Jerez, representatives of RECEVIN (the European City of Wine people), The Spanish Wine Federation and the Foundation for Research into Wine and Nutrition.

On Friday afternoon, the Consejo is holding an event at their premises, and a visit and dinner at Gonzalez Byass can be enjoyed too, as well as the first spectacle of the Festival of Jerez: a Flamenco ballet at the Villamarta theatre. On Saturday at 10.30, the RECEVIN president, Pietro Ladanza, and the mayoress of Marsala (last year’s City of Wine) will deliver the City of Wine flag to the Council. Members of the European Cities of Wine Network will then have lunch at Bodegas Lustau. In the afternoon, they can see a horse show at the famous Real Escuela, and go to the Atalaya in the evening for dinner and a show.

Many bodegas are holding doors open days; there are guided city and vineyard tours, tastings in tabancos, while the Alcazar, the Archaeological Museum and the Cloisters of Santo Domingo have programmed events connected with wine, some aimed at educating children. There will also be an exhibition of old Sherry labels at Bodegas El Maestro Sierra, as well as an exhibition of the paintings of Jose Bastos at his studio in the Plaza Domecq.

This is only some of the programme planned for the year, and the full programme can be obtained from the websites of the town Council (Ayuntamiento), the Consejo Regulador and Turismo Andaluz. This is really a year to visit the Jerez area, and I urge you to go!

Gonzalez Byass has signed a 60 million euro joint venture deal with Philippines drinks giant Emperador for the production of brandy in Spain. Emperador will buy 50% of GB spirit production subsidiary Las Copas, which owns 275 hectares of vineyard near Toledo, a distillery in Tomelloso and brandy production facilities in Jerez, for 60 million.

Emperador Brandy is the second largest selling in the world with sales of 270 million litres, and could now get involved with Jerez Brandy production, as it only has to be aged in Jerez.

Jose Maria Ruiz Mateos (Nueva Rumasa) is to appear in court, yet again. He and his sons, Zoilo, Javier and Pablo – who have already appeared, are accused of paying large sums of cash under the table to a man to obtain them EREs (Expedientes de Regulacion de Empleo – a legal way of getting rid of workers when a company is in trouble). Nueva Rumasa collapsed and was sold off long ago, but its ramifications persist.

American naval ships are arriving at Rota as part of the Anti-Missile Shield. The first of four destroyers has already arrived, and these ships will be based at Rota, a joint US and Spanish naval base for the last 60 years, where, it is hoped, their crews and families will give a boost to the local economy – as well as protect it. Another recent arrival is an American ship loaded with Syrian chemical weapons, which it will destroy out at sea. 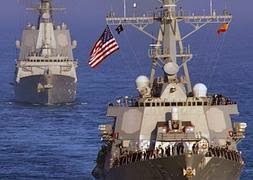 High winds and heavy rain have caused all sorts of problems in the Jerez area, especially towards the coast. One bridge is down, football matches have been postponed, trees down everywhere.....At least it should avert a drought such as that experienced in 2012.