Guitar legend Paco de Lucia has died in Mexico of a heart attack aged only 66. He was without doubt the most influential flamenco guitarist of the XX century, and leaves behind a phenomenal legacy. 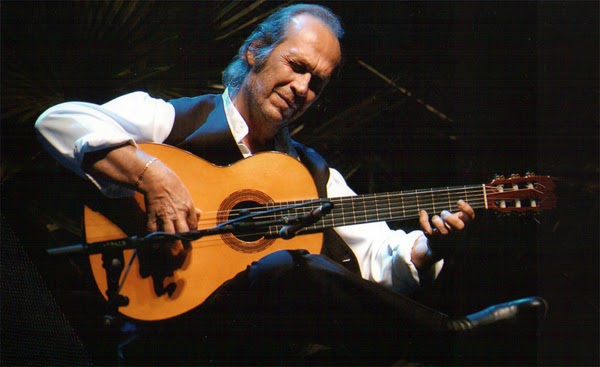 Over the years he won every award going for his skill with the guitar. His recordings with another legend, Camaron de la Isla, were of the highest quality, especially the bulerias. Paco was always restless, moving forward. He played other forms of music as well as composing his own (like the classic Entre dos Aguas): his Concierto de Aranjuez (by Joaquin Rodrigo) was beautifully played, and he ventured into jazz as well, playing with names like Chick Corea and John McLauchlin.

Francisco (Paco) Sanchez Gomez was born in 1947 in Algeciras, where now, preparations are being made for his funeral, which will be attended by thousands. Cadiz has lost another legend, but look for him with Camaron on You tube – pour a glass of Sherry, sit back, and be amazed.

The Consejo, the town council of Jerez and TV station canal Sur have organised a public toast to celebrate Andalucia Day and Jerez being European City of Wine tomorrow, 28th February. It will take place in front of the doors of Santo Domingo church at 12.30. The municipal band will play the national anthem of Andalucia, and venenciadores will be there dishing out Sherry. The event will be broadcast live. If you can’t be there, be sure to join in with a glass of Sherry anyway!