Barbie, the biggest-selling doll in the world, will be present at the forthcoming Mercedes Benz-sponsored Flamenco fashion show to be held at Gonzalez Byass on 6th February.

There will be a special exhibition of around 400Barbies in a variety of Flamenco costumes and in a variety of scenes, such as a bodega, El Rocio, at the bullfight, at the Feria etc. She will, of course be accompanied by her long-term boyfriend, Ken, who will be dressed as a bullfighter, a horseman etc.

The exhibition can be seen for 2 euros at the Sala de Arte in Gonzalez Byass from the 6th February to the 8th of March, coinciding with the end of the XVIII Festival de Jerez.

The Consejo Regulador has its eyes set on the Asian market, where Japan is already a major – and growing - customer for Sherry, and sees similar possibilities in China. According to Beltran Domecq, they have already been working on China for a while, but he is going there in March to do his bit to promote Sherry there.

An “important” plan is already underway for extra promotion in the existing major markets:  Spain, UK, Holland, Germany and the USA. South America has distinct possibilities, like Mexico, for example, but it will need more time.

Beltran Domecq closed the big wine and gastronomy fair Enofusion yesterday with a top level Sherry tasting, where he promoted the forthcoming wine fair in Jerez, Vinoble, which will be taking place on 25-27 May. 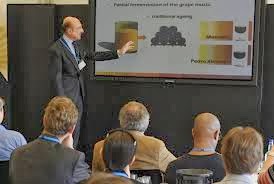