An interactive tasting of Finos and Manzanillas has united Jerez with Australia. The online tasting was organised by Chelsea Anthon of International Sherry Week and conducted by Cesar Saldaña, director of the Consejo Regulador. “Fino and Manzanilla Masterclass” was the name given to the tasting, and ten guests enjoyed the interactive tasting from Tapavino wine bar in Sydney Australia in live contact with Jerez. The wines tasted were: 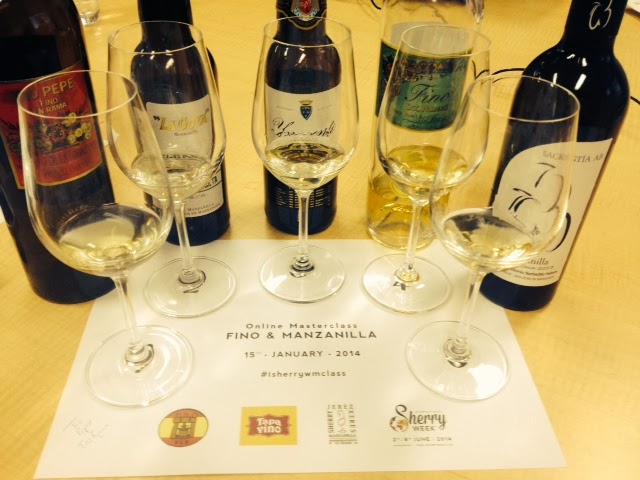 Fitur, the international tourism trade fair now in its 34th year is currently taking place in Madrid and closes tomorrow. It was opened by Prince Felipe and Doña Letizia. Needless to say, there is a strong representation from Andalucia, and particularly the Sherry zone. Sanlucar for its part, has presented the posters for the 3 main tourist events, the Carnival, Semana Santa and the Feria de la Manzanilla (27th May-1st June). They were also promoting the VI Ruta de la Tapa y de la Manzanilla which will take place on 1st September. El Puerto de Santa Maria has a stand too, in which they are promoting the city with the slogan “365 Days and 360 Degrees”, highlighting the fact that there is something interesting going on every day. Sherry is naturally a key part of their strategy. Jerez is, of course promoting itself as European City of Wine 2014.

Vivir el Vino Magazine has chosen Barbadillo’s Palo Cortado VORS as its best fortified wine in its “11 Magnificos”(the eleven best from their respective Dos), a part of its 2014 guide. The prizes were handed over in Madrid on Tuesday. The guide presents the 365 best of over 1,500 tasted blind.

“If any Spanish wine deserves 100 points, it is without doubt Sherry”. This is what Carlos Dominguez had to say about our beloved wine as his tasting team descended on Jerez to do the tastings for the 2014 Guia Peñin. Carlos is director of the Guia. In last year’s edition, Sherry achieved the best scores, and averaged 91 points. As is habitual with the Guia, no wine can score 100 points, and last year the highest score was 98. Two Sherry brands achieved this: Equipo Navazos and Barbadillo.

Jerez is traditionally the first stop for the Peñin tasters on their whistle-stop tour round Spain’s wine regions during which they will taste some 10,000 wines from 135 regions. The Sherry wines just keep getting better, according to Carlos, “they are spectacular. Tasting these wines imposes respect for them, and requires serenity”.

The Consejo Regulador is proposing to break the Guinness World Record for the Venencia. (the long flexible stick with a cup at the end for extracting Sherry from the butt) The winner of the 11th Venencia competition in Japan (where the competition is held), is Shuji Fujikawa, a young cocktail bar owner, who is currently in Jerez to receive his title from Beltran Domecq and visit bodegas.

The Japanese love Sherry, and there are over 100 Japanese venenciadores registered with the Consejo. They even go so far as to serve Sherry with a venencia direct from the barrel in Japanese bars and restaurants, not from the bottle. The Bamboo cocktail is popular in Japan, and consists of one part Fino Sherry, three parts dry vermouth and a dash of Angostura bitters.

The Consejo plan is to beat the Guinness record for the highest number of venenciadores pouring at the same time, which currently stands at 61, and which was achieved in Seville in 2005.