Appearance
Bright strawy gold with golden highlights.
Nose
Fresh and unmistakably Palomino with its aromas of quince and both fresh apple and stewed apple with slight traces of straw, apricot and green herbs. There is an attractive "out in the countryside near the sea" air about it and it smells very natural - which in fact it is,
Palate
Very clean and fairly crisp and tangy with all that apple flavour and a faint flavour and feel of apple skin as well. Being from Balbaina, it has a very gentle background salinity and a faintly dry chalky texture which give it a very clean finish.
Comments
This wine is made in Sanlúcar by Rafael Rodríguez Jiménez, a third generation mayeto (grower-producer) who is also affiliated to Mayetería Sanluqueña. He makes a couple of the Corta y Raspa wines and has a little bodega in the Barrio Alto of Sanlúcar. The Palomino grapes for this wine came from vines of over 50 years of age in the Viña La Palma in the pago Balbaina, where they grew on three hectares of tosca cerrada albariza soil. The wine was made the artisan way with the must being fermented in ex Manzanilla butts and the wine aged in them until bottling in April 2019 with minimum stabilisation.
Price
10.60 euros, De Albariza 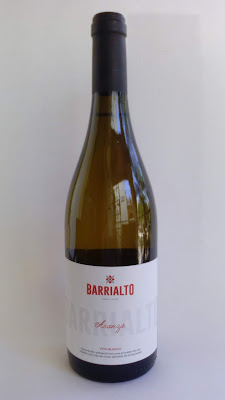