Appearance
Brassy, amber tinted gold with old gold highlights.
Nose
Raw Palomino is very appley and this is especially so as it was fermented on the skins, more or less the red wine process which gives greater extraction. There are also aromas of stewed apple, quince and very faint traces of cider, rhubarb and ginger, so it is unusual but rather captivating.
Palate
Quite full bodied for a white with a refreshing zingy acidity yet there is a trace of glycerine to round it off, and the slightest hint of tannin in the generous texture, lots of apple of course, it has a very slightly "stewed apple and rhubarb with a hint of custard" flavour but it is not sweet and is more interesting with a decent finish which is clean as a whistle.
Comments
This lovely wine is made from 100% Palomino grapes grown on 35 year old vines in the sandy soil of the 1 hectare Viña Los Caracoles in the pago Marquesado near the Atlantic coast in Chiclana. The grapes are de-stemmed and fermented with the skins for a week before pressing, completing the fermentation and ageing on the lees for nine months in a fibre glass tank without flor before bottling. Apart from ageing in fibreglass, the production process is identical to that of the Sparus Aurata, the main difference being the personality of the vineyards themselves, something very important to the Gómez Lucas brothers. They also make their wines totally naturally, nothing added or subtracted. Again the yield is tiny, and only 1807 bottles were produced. Liza Ramada is the thinlip grey mullet in English and "morragute" in Spanish.
Price
17.15 euros, Licores Corredera 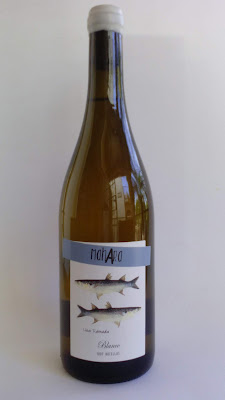