This is a family wine business run by Peter Maurer, a Jerezano of German origin. A trained agronomist, he has worked for much of his life as technical director with Asaja, the agricultural association of Cádiz. With a lifelong passion for viticulture, in 2007 he bought the 4.5 hectare Viña Angelita estate which lies at 30 metres above sea level close to the Guadalquivir estuary near Lebrija with the idea of planting his own vineyards. But the soil was too salty and lacked nitrogen and organic material, so he devised ways to use rainwater to flush the salt to a nearby pond and planted cereals and legumes which were later ploughed – in to improve the soil which he farms organically.

There are all sorts of trees and shrubs like pines, oaks, olives, lavender, rosemary and more around the vineyard to provide the maximum possible diversity of flora and fauna, and there are also fruit tress like figs, apples, grenadines, medlars, almonds... In only 3 years he successfully took on the by no means inconsiderable challenge of vine growing in this salty marshland and gradually created a whole new organic ecosystem from nothing. He brought it to life. Now it sports Syrah, Petit Verdot, Merlot and Pinot Noir. 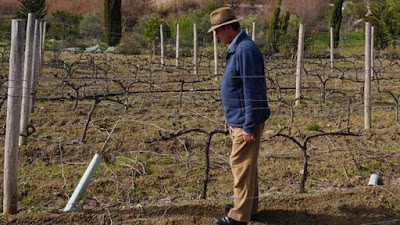 The plan from the start was to produce wine of maximum quality and he was the first to plant Pinot Noir in the area. Pinot, native to Burgundy, is accustomed to more northerly climes and higher altitudes and is a tricky grape to work with but it has acclimatised well and is producing very good wine. Green harvesting is practised to reduce quantity and improve quality and concentration in the bunches and takes place at the “envero” or when the grapes begin to change colour. This obviously gives lower yields but better wine. At harvest time the grapes are sorted and loaded into a refrigerated lorry and taken to the bodega he rents in Vejer de la Frontera where they are sorted again. Everything is done in the traditional way and with enormous respect for the environment. Production is around  10,000 bottles. 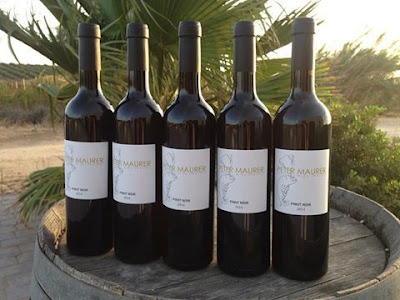 Two ranges of wines are produced: the blends which are called “De Raiz” and the monovarietals called “Peter Maurer”. The wines have won various awards at organic wine competitions: