Crisp fresh red and black berry fruit: brambles, blackcurrants, raspberries and plums and the faintest and very slightly smokey note of cinnamon which may have to do with the Syrah and/or the French oak. There is also a gentle hint of salinity adding a cleanness to a very attractive and inividual nose.
Palate
Full bodied and very fruity with a lively acidity which accentuates that fruit. On the phenolic side there is considerable extraction and notable though modest tannins give it a dry grip aided by a hint of chalk but nothing aggressive, allowing the fruit to dominate. It is remarkably drinkable- indeed moreish - for such a well structured and young wine, and will certainly develop well over the next couple of years. Good long fruity finish with that almost exotic hint of cinnamon.
Comments

Juan Jeronimo Timermans is based in Trebujena and this wine comes from the pago El Duque which sits on various forms of albariza. It is made from Tempranillo, Cabernet Sauvignon, Syrah and Merlot which were picked quite late in the season, at dawn for maximum freshness, on the 12th September. It was fermented in tank followed by three months ageing in French and American oak barrels and bottled without filtration or clarification. Only 500 hand numbered bottles were released sealed with a Diam cork.
Price
12 euros, De Albariza 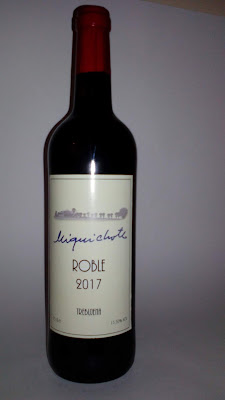