Distinct aromas of cacao up front but not so much that the fragrance of the base wine is obscured and in fact these two very different aromas seem to work beautifully in harmony. It smells interesting and appealing rather than odd, and there are faint background traces of wood and orange as well, and the base wine would appear to be of fine quality.
Palate
The Sherry is a bit more prominent now giving a certain ripe fruitiness and structure which balances nicely with the cacao as the proportions are perfect and well harmonised by ageing. Naturally there is a bit of sweetness in the wine but again this has been judged perfectly - medium sweet perhaps - so it is not at all cloying. It is reasonably light, clean, fresh and tasty with a good long finish.
Comments

Unfortunately named (at least to English speakers) and a bit unusual though it might be, this wine is really nice, though it is probably best after dinner and only very slightly chilled. Its creator is José Antonio Palacios who was once the oenologist at the great bodegas of Pedro Romero in Sanlúcar and now at Bodegas Alonso, which is of course one of the old Pedro Romero bodegas. It consists of Oloroso aged in a butt for a considerable time with cacao essence - the end product is 15 years old - which gives it those chocolatey aromas. Production is tiny with only 250 x 50cl bottles released. The wine was the brainchild of a capataz back in the 1950s but it was forgotten about until José Antonio resuscitated and adjusted the formula. Fernando Poo, also known as Bioko, is in fact an island belonging to Equatorial Guinea off the coast of Cameroon which is a noted producer of cacao. It was discovered by the Portuguese explorer Fernão da Pó in the XV century and later colonised by Spain. It even had its own postage stamps.
Price
13.50 per 50cl, De Albariza 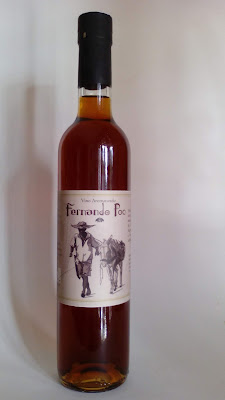