Vinoble Tastings 2018: A Tour round the Albarizas of the Marco de Jerez

This phenomenal tasting was given by Willy Pérez and Ramiro Ibáñez, whose intimate knowledge of almost every grain of albariza in the area they so obviously love with a passion  is quite incredible. On arrival everyone received a beautiful glass-fronted wooden box containing samples of the soils the wines came from along with detailed notes of vineyard locations and conditions and the wines themselves. It had all been beautifully thought out, and just as well, as they had so much to talk about that there was not enough time so they had to rush the tasting, which consisted of 9 wines, slightly to cram it all in. First they took a look at the climate and how the landscape was formed, explaining why all the different pagos, and indeed vineyards within them, are different, and thus why the wines taste different from different places. Then we tasted the wines which were all the more fascinating knowing their background, but there was little time for tasting notes. 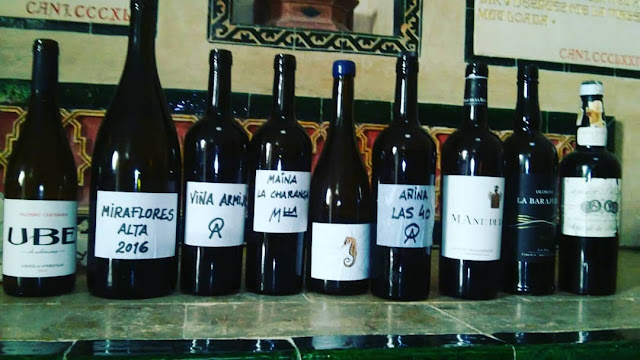 Ube Carrascal 2014 Ramiro Ibáñez Cota 45
There are two pagos in the Marco de Jerez with the name Carrascal, one is north of Jerez and one of the farthest inland, while the other is the closest to the Atlantic of the Sanlúcar pagos, a little south of the city, so the results are very different. The pago covers 230 hectares and its long flank parallel to the sea and its gently sloping disposition eastwards leave it exposed to the humid west winds which moderate temperatures. Soils are more mixed towards the west with more lustrillos and lentejuelas towards the east. This wine comes from the 0.7 hectare Las Vegas del Carrascal vineyard in the north east of the pago at its highest point. The vines are over 100 years old and different clones of Palomino: Fino, Jerez and Pelusón. Ube is made from a field blend of these vines and fermented in butt where it is aged for 2 years, full to avoid flor. It has amazing depth and balance with hints of caramel and apple and a lovely texture.

Ube Miraflores Alta 2016
From the neighbouring 150 hectare pago Miraflores Alta just to the east of Carrascal. This pago is probably the "grand cru" of Sanlúcar and roughly two thirds of it faces west and one third east. Elevation can reach over 60 metres and soils are mixed with lots of white marl, various qualities of lustrillo and some brown albariza, while further west lentejuelas, tosca cerrada and occasional barajuela can be found. This wine is made from a small west facing parcel of 1.45 hectares which once belonged to Rodríguez Lacave. The wine was made exactly the same way as the Ube Carrascal, the only difference being the vineyard (and the vintage). Lovely wine: texture, apples, brine...

Amontillado El Armijo
Viña El Armijo belongs to the Florido family and is at one of the most elevated points of the pago Miraflores Alta. The vineyard extends to 33.5 hectares with slopes facing both west, with tosca cerrada and a little lustrillo, and east, where the buildings stand, where the soil contains more marl. The west facing slope gives more wine with more zip while the other gives more depth and structure. This Amontillado is produced here from the soleras of Gaspar Florido. It spends 10 years under flor before spending another 12 ageing oxidatively, and being a natural Amontillado no refortification is done. It is simply beautiful; fragrant and expressive, intense yet elegant, but limited in availability.

Manzanilla La Charanga
La Charanga is a famous old finca in the northern part of the pago Maina (or Mahina) dating back to 1794. Here the Atlantic has much less of a role to play as the finca is 15 kilometres away, east of Sanlúcar, however it is surrounded by the Guadalquivir marshes. The pago has 170 hectares divided into 153 vineyards and the soil is extremely fine with a high clay and fossil content. This single vineyard Manzanilla comes from the 1.7 hectare vineyard of La Charanga and the mosto is fermented in butts and the wine has an average age of 5 years. It is super tasty and zippy yet serious, lovely.

Dos Palmas 2009, Bodega Forlong
The 1825 hectare pago Balbaina Baja is just outside El Puerto de Santa María, around 6 km from the Atlantic and has a long history. The vineyard altitudes lie between 50 and 60 metres and soils here are mixed with various albarizas, lustrillos and bujeos. Bodega Forlong is located in an old organic vineyard of that name and run by Rocío Áspera and Alejandro Narváez who have made a great reputation for interesting and high quality table wines. This one is as close as they have come so far to Sherry. It is 100% Palomino Fino fermented in butt with three years crianza under flor. It is delicious, quite full with enormous depth of flavour with ageing potential even now. 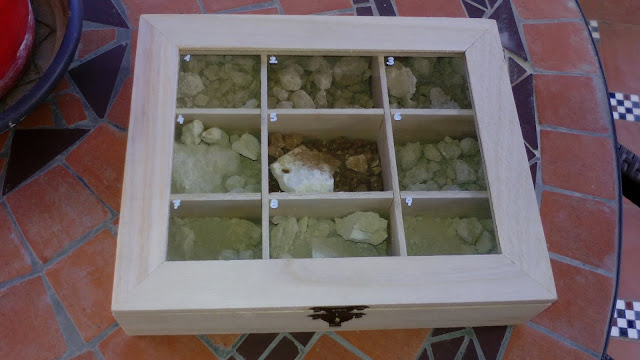 Amontillado Las 40
This wine is from the pago Añina, around 6 km north west of Jerez, which dates back at least to Roman times. It is a large pago about 13 km from the coast extending to some 800 hectares and thus soils vary between mostly lustrillos and bujeos. Wines from here are considered as being between Balbaina and Macharnudo in style. The Viña Las 40 lies at the heart of the Marihernández sub-pago on about 18 hectares (or 40 aranzadas, hence the name) of high quality white marl. The wine is a natural Amontillado - not refortified - made on site in a completely artisan way with the solera only being refreshed occasionally to replace transpiration losses. It is 20 years old and absolutely lovely, nutty, fresh and elegant with amazing length.

Vino Blanco 2016, La Riva
This cracking wine comes from the famous Viña El Notario vineyard in the northern part of the Viña Majuelo (owned by Fundador) part of the 800 hectare pago Macharnudo. This "grand cru" of Jerez lies north and slightly west of the city, some 18 km from the coast, with a maximum elevation of around 135 metres. Most if it  slopes south and has probably the purest and deepest albariza in the area. Many famous Sherries were born here. The De La Riva Vino Blanco was made by hand picking the grapes comparatively late, sunning them for 8 hours before pressing them gently for a low yield and fermenting the mosto in butts and ageing it under flor for 10 months.

Oloroso Barajuela 2013, Willy Pérez
This superb wine is from Willy Pérez and comes from the El Corregidor vineyard in the pago Carrascal, north of Jerez and to the east of neighbouring Macharnudo. Located  around 20 km from the sea at an altitude of some 113 metres, the vineyard has 60 hectares of which 29 are Palomino at 45 years of age and planted in the traditional vara y pulgar. The soil is barajuela. The vineyard is harvested in various passes to make various products, and the grapes destined for Oloroso are picked in late September and sunned for 24-48 hours before fermentation and static oxidative ageing. The result is a delicious super smooth classic old fashioned un-fortified Oloroso.

Amontillado Fino Carta Blanca, Agustín Blázquez
Carta Blanca was a famous wine in its day and was made from grapes grown in the Viña Blázquez vineyard in the pago Macharnudo Bajo. After a day or more of sunning the grapes the wine was fermented in butts where they reached an alcohol level of around 13.5 - 14%. No further alcohol was added and the wine slowly became a natural Amontillado. Carta Blanca was drawn from the 1st and second criaderas of this solera. This bottle dates from the 1940s and was in perfect condition. In fact it was absolutely superb, representing a style that has been lost: the ultimate expression of Fino, a much fuller wine than we are used to now, allowed to develop towards Amontillado, and completely naturally. Luckily I managed to obtain a bottle and will post notes anon. 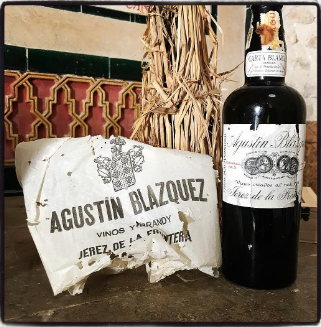